Niger is one of the world’s poorest countries with a high birth rate and some of the continent’s lowest health indicators.  It was found that women lacked even the most basic health information.  To address this, more than 650 of Lifeline Energy’s radios were distributed to women’s listening groups and community health centres.  The aim was to provide dependable access to Animas Sutura’s interactive programming. Animas Sutura, a local social marketing organisation, launched ‘Les Aventures de Foula’ (The Adventures of the Foula, a name for a condom they distribute), a radio communications campaign in 2007. 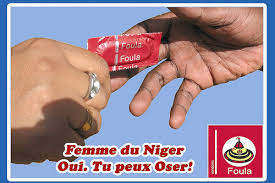 One of the contributing factors to the high birth rate is widespread polygamy in Niger. According to the women we spoke with, “most men do not use a condom, as it is like eating a banana with the skin”.  Educating male and female Nigeriens became an urgent priority.

The national literacy rate for women is less than 15%, also one of the lowest in Africa.  There is a lack of schools in many communities, but also early marriage is common.  Radio was the best way to reach them.  However, women often didn’t have money to buy batteries and they weren’t always available in far flung communities..

Given these key challenges in spreading sexual and reproductive health information, our solar and wind-up radios were procured. The ‘Les Aventures de Foula’ campaign increased access to HIV/AIDS awareness and prevention, the benefits of condom use, family planning and other vital health information.

Consisting of a series of five-minute programmes on vital health issues, with themes, stories and characters from the lives of the local population, Les Aventures de Foula was broadcast on national, private and community radio stations in French, Hausa and Zarma numerous times a day.

It helped women identify and discuss previously ‘unmentionable’ topics, learning how to protect themselves and counsel their daughters against HIV/AIDS.

Each radio benefited an average of 30 women listeners directly and many more indirectly.

share this page:
← Guns for Radios and Radios for Peace in Niger Community Participation For Action →