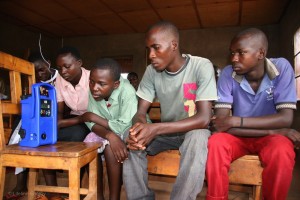 Did its inventors ever imagine the profound role radio would play in spreading news, information and education around the world? Particularly in large parts of Africa, where people have no access to the latest technology, radio remains the only reliable link to the outside world.

Democracy’s principles include, among others, the rights to education, health care, information – in other words, the right to know.  It is in these areas that radio plays a powerful democratising role in a society.

For example,  for Zambian children who live too far from government schools or who are unable to attend school because caregivers cannot afford books, uniforms or exam fees, the Taonga Market interactive radio instruction (IRI) programme offers the opportunity to learn and be educated. Many of the children who have studied through Taonga have gone on to secondary school – a real achievement in a country where girls are just as likely to marry early as to complete school.

In the Dadaab refugee camps in Kenya, community radio has helped give a voice to the voiceless. Women’s radio listening groups are empowered to express their views, by calling the local stations from a cell phone, and stimulate debate on controversial topics such as female genital mutilation, early marriage, domestic violence and women’s rights.

The absence of information causes fear and panic in crisis situations, such as the recent Ebola outbreak in West Africa. In an emergency, people want to hear information from people they can trust, and they want to know what they should be doing. Humanitarian organisations as well as governments in Liberia, Sierra Leone and Guinea are using radio to spread vital information that can help halt the spread of the virus.

The UN has declared 15 September International Democracy Day, with this year’s theme being “Engaging young people on democracy”. Is there any better tool to engage those young people who have no access to technology, and often no access to electricity, than radio?