Like many social enterprises, we started with a great idea and a shoestring budget. We began formally working out of an apartment in London in January 1999. At that time we were known as the Freeplay Foundation. Within a few months, we’d moved into a shared office with a company called Freeplay Energy, which manufactured the Lifeline radio for use in our initiatives. Although we shared a brand, we operated independently as a registered charity. Our boards were entirely seperate in the UK, US and South Africa, where we also had an office. Freeplay was a reliable supporter and supplier until August 2008, when a Delhi-based businessman bought the company. From that point forward, the relationship changed. Freeplay bore little resemblance to the values-driven company we’d known.

Freeplay became an increasingly unreliable supplier for our Lifeline radio. We conceptualised and raised development funds to produce this radio. In 2010, we re-launched as Lifeline Energy, a name that we felt more accurately described our mission. A few months later, Freeplay Energy UK was put into administration and ultimately liquidated, despite owing the charity significant funds.

Providing Information Access to Those Who Needed it Most

Since 1999, in collaboration with for-profit manufacturer Freeplay, we worked across sub-Saharan Africa, to distribute wind-up and solar-powered radios to groups who needed them most: child-headed families in Rwanda, flood-displaced populations in Mozambique and teachers in Zambia. Quickly establishing a reputation for speed, flexibility, efficiency and results, we built NGO and UN partnerships and coalitions across the continent.

However, we quickly realized from talking to recipients, that Freeplay radios, which had been designed for commercial and Western consumers, were not appropriate in humanitarian projects. Kristine Pearson discovered that if wound anti-clockwise, Freeplay radios would break. From that point on, we set our sights on creating a solar and wind-up radio designed specifically for distance education and children living on their own.

The Lifeline Radio Comes to Life

In November 2001, we won the first Tech Museum of Innovation Award. The $50,000 NASDAQ-sponsored prize financed the research and development of the Lifeline radio. We secured additional funding from Vodafone Group Foundation, Anglo-American and technology pioneers Leonard Fassler and Brad Feld. 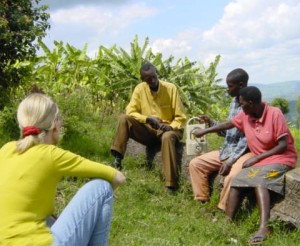 Working from a design brief created by Kristine Pearson with input by orphaned children, engineers produced several radio designs. Each one was evaluated rigorously by field testing them with children who had low levels of exposure to technology. Kristine then took the first fully working prototype to Rwanda and Kenya where focus groups of orphaned children gave us impact. From their feedback, 31 changes were made to the final design. Although she’d never heard the term “human-centred design”, this is exactly what it was!

In April 2003, two years after Kristine wrote the concept paper for the Lifeline radio, an 18-year-old orphaned Burundian refugee became the world’s first Lifeline radio recipient. She was one of 500 young listening group leaders who received Lifelines in the Tanzanian camps as part of a Voice of America (VOA) youth health project.

Between 2003 and 2010, when we launched our next-generation Prime radio, we distributed over 255,000 Lifeline radios in sub-Saharan Africa (and beyond) reaching many millions of listeners. They were used in distance education projects, emergency response initiatives, refugee camps, women’s listening groups, at health clinics and to support child and widow-headed families.

While we understood from the outset what people listened to on the radio—it took us longer to realise that at night, people were listening in the dark. An estimated 75% of the population of sub-Saharan Africa (outside South Africa) lives without access to electricity.

This is why we expanded into the lighting sector. We undertook a series of lighting-needs assessments, which included child- and grandmother-headed households, and dwellings where someone was ill. Results in hand, we worked with engineers to create a range of fit-for-purpose clean energy lights and lanterns called Lifelights.

However, we discovered that the financial investment required to pursue both lighting and educational products isn’t possible for a lean and agile organisation such as Lifeline Energy. As a result, we focused on the area where we have the greatest impact: audio products for mass education. We continue to deliver solar lighting products to support education and emergency response initiatives with other partner suppliers.

Few commercial companies develop products specifically aimed at users only at the base of the pyramid. The creation of the Lifeline radio demonstrated the importance of appropriate development process for this sector. Therefore, we took the strategic decision to establish a for-profit company, Lifeline Technologies Trading Ltd (LTT). LTT started operating in 2010 as a UK company focused on developing, manufacturing and supplying appropriate products to the humanitarian sector. A charity owning a for-profit consumer electronics company is a unique social enterprise model. Profits from Lifeline Technologies accrue to the charity, creating a virtuous circle.

The Lifeplayer MP3, which Lifeline Technologies developed, has already been acknowledged as an “INDEX: Design to Improve Life” finalist and an SAB Foundation Innovation Award winner. The company also designed the Prime radio and the SolarStor cell phone charging solar panel.