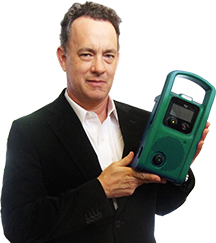 Two-time Academy Award winner Tom Hanks has served as Lifeline Energy’s American Ambassador since 2003. In January 2008, he hosted an auction for Lifeline Energy on eBay, creating a YouTube and autographing Lifeline radios. The auction enabled Lifeline Energy to provide more than 9,000 children with radio education.

Tom is also the primary funder behind the development of the solar and wind-up Lifelight. His generosity has allowed Lifeline Energy to conduct energy poverty needs assessments, surveys and to undertake field trials in Africa with vulnerable women and child-headed families.

In addition, Tom and his friends are the principal funders of the Lifeplayer MP3 and the Prime radio. We are deeply grateful of Tom’s support of Lifeline Energy and our work.

Sibusiso dedicated the 1,113 kilometres he trekked in Antarctica in some of the worst conditions imaginable to the children of South Africa.As a result of this generous act and hundreds of sponsors supporting Sibu, in May 2008 Lifeline Energy was able to provide 300 Lifeline radios to children from the Nkomazi district in the Mpumalanga Province, where he was born.

Sibusiso has served as Lifeline Energy’s South African Ambassador since 2006.

“The future entirely depends on the education of children, their access to information to broaden their thinking and understanding of the ever-changing and challenging world” says Sibu.

Sibusiso started climbing in 1996 while also serving as a game ranger in Swaziland. In March of 2003, Sibu set off for the Himalayas in his quest to be the first black African to summit earth’s largest and most fearsome mountain– Everest. He successfully summitted Everest May 26, 2003 and again triumphed June 3, 2005, becoming the first South African to summit Everest twice in two attempts, using two different routes.

Sibusiso continues to speak all over South Africa, encouraging all people to attempt their own Everest, touching people everywhere with his warmth and humility.His passion is to talk to as many children as possible, in as many schools as possible. He tells them not only to dream, but to never give up on their dreams — believe in them and go for them wholeheartedly.

Terry Waite (CBE) has served as Lifeline Energy’s European Ambassador since 2001 and also chaired Lifeline Energy’s UK Board of Trustees until 2009. A respected writer, broadcaster and former advisor to the Archbishop of Canterbury, Terry was held hostage in Lebanon for five years (mostly in solitary confinement) from 1987-1991. A small radio got him through his long period of confinement …until the batteries eventually went dead. Terry understands the power of radio better than most.

Terry continues to operate at the forefront of humanitarian issues. In particular, he provides support to hostages and their families, as well as working in the areas of mediation and conflict resolution. Queen Elizabeth bestowed on Terry the Commander of Order of the British Empire (CBE) honour in 1992. He remains actively involved with the homeless charity, Emmaus.