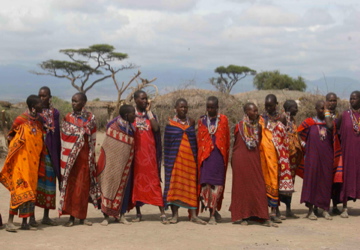 In response to the pressing need to reduce kerosene (paraffin) use by poor women in Kenya, ‘Lighting the Way to Leadership’ launched to pitched excitement in the Maasai heartland of Narok. In collaboration with the respected Kenyan NGO, Caucus for Women’s Leadership (www.kwpcaucus.org), 500 Lifelights were distributed to mainly rural women leaders in assemblies across the country.

Local Caucus convener, the formidable Eunice Marima, organised 50 Maasai women leaders to receive Lifelights and radios. Half arrived in traditional dress and beaded jewellery and the remainder, who were mainly teachers, wore Western dress. It didn’t matter if they were illiterate or highly educated, their issues and concerns were identical. They all said that they came ‘to learn and gain knowledge’.

The woman told of how they all cut trees for firewood. With increased deforestation and 4 years since the last good rain, they have to walk farther and farther in the scorching sun. Wood is used both for cooking and for light. In Kenya, kerosene – which is very loosely regulated – can be bought in any type of container. Women might only be able to afford 20 Ksh (30c) and often take a disused Coke or water bottle to the kersene seller.

The lights they use are called ‘koroboys’ – a tin can with a cloth or string wick. They emit noxious smoke, blackening the walls and ceiling. Every woman had a heartbreaking story to tell of how kerosene causes havoc in their lives, prompting one woman to call kerosene the ‘fuel of the devil’.

What these women said echoes what we have heard at Lifeline Energy time and again in Africa. The fact is that kerosene is a woman’s fuel, and it is women who suffer the toxic consequences. As each woman lights the dangerous liquid, it is her eyes, her lungs that are damaged. Sometimes it is even her death sentence, evidenced by the appalling number of household fires that occur each year.