As a result of the 1994 genocide, Rwanda gained one million orphans as an estimated one million people were killed.  According to official government statistics, children headed 101,000 households.  One in three children was orphaned and 17% of the population was headed by a child under 18. Over the course of 14 years, we provided 15,000 solar and wind-up radios to child-headed households which reached at least 200,000 children directly and many others indirectly.

To be an Orphan in Post-Genocide Rwanda 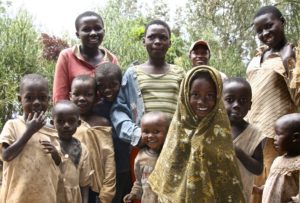 Children orphaned by the genocide

Children orphaned by the genocide were the poorest of the poor – vulnerable, often hungry, and malnourished. A UNICEF study revealed that 60% of these children did not care whether or not they grew up; 90% had witnessed an act of violence; and only one in 82 orphans attended school. Not unsurprisingly, children continued to be orphaned by HIV/AIDS given the alarmingly high rate of rape during the war.

These children were forced to take on responsibilities a child should never have to face. Most eked out a living by subsistence farming. Lucky ones owned goats or chickens. The clothes they owned were those on their backs and they were often barefoot. Most lived in mud and thatch houses and slept on the ground.

The youngest survivors of the genocide remained vulnerable to their surroundings without the protection of an adult. They were open to neglect, abuse and exploitation.  Further, they were at risk from HIV/AIDS and other diseases such as diarrhoea, cholera, malaria and TB.  Many were stunted from malnutrition.

Without schooling or relatives to guide them they lacked the most basic information and knowledge. Their parents, aunts, uncles and grandparents could have been killed. To make matters more stressful, their neighbours might have been involved.  What they did trust, however, were the voices on the radio.  Despite Radio Mille Collines helping to fuel the genocide, there were several soap opera dramas they could listen to covered issues, the environment and peace and reconciliation. Orphaned children were even included in the drama’s story lines. 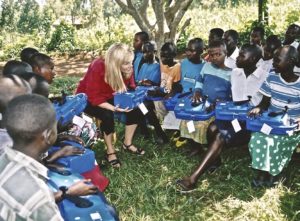 Training of child heads of households

Against this backdrop, Project Muraho was created by Lifeline Energy (still known as Freeplay Foundation back then) and our local partner, an Irish charity.  Project Muraho saw the distribution of 15,000 wind-up and solar radios to child-headed families.  Trainings took place whereby a radio “guardian” was selected.  We required guardians to be at least 12-years of age.  They signed a contract, which was read aloud informing the children of their role and responsibilities. The local NGO also kept a copy for tracking. The guardians were trained on the used and care of the radios and how to be a listening group leader, amongst other things.

Over the years, we worked with several organisations to distribute the radios, including CARE International, AFXB, Trust and Care, Fair Children Youth Foundation, and others. Funding came from a Canadian foundation, a Spanish foundation, Rotary UK and Northern Ireland, The Times of London Christmas Appeal, GlobalGIving, Tom Hanks and other individuals.

To this day, Project Muraho has been one of out most impactful initiatives.