Sengerema is a rural district in northwestern Tanzania, an hour’s drive from Lake Victoria.  More than 80% of the population are subsistence farmers. A multi-purpose telecentre is making a positive difference to the region. The Commission for Science and Technology (COSTECH), invested $100,000 in the centre which boasts a community radio station, an Internet cafe, a business centre with phone, fax and secretarial services. 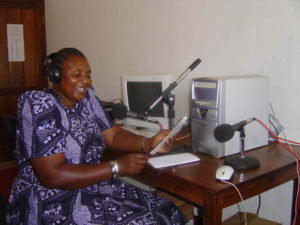 The telecentre – and particularly the radio station – is the most potent source of information for most of Sengerema. Several community members were trained as announcers, producers and journalists. Women were encouraged to get involved in all positions at the FM community radio station. People were interested in news, announcements and information taking place in their area, as opposed to what was going on in the capital of Dodoma or in Dar es Salaam.

In 2004, we donated 90 of our solar and wind-up radios to COSTECH to support the radio station. The radios were funded by the Vodafone Group Foundation in the UK.  Vodacom Tanzania sponsored Swahili cartoon format posters which accompanied every radio. The laminated posters showed how to use and care for the radios on one side, while health messaging on was the other.

All programmes were broadcast in Swahili. One of the most popular radio programmes was called Demystifying Technology, which explained the Internet and encouraged adults, in particular, to give it a try in the internet or ‘cyber’ cafe.