African Innovator of the Month

A Shining Role Model for ICT Women in Africa

At just 25 Clarisse Iribagize has created one of the leading mobile technology companies in Rwanda. In 2012 she won an Apprentice-style reality show for Africa, winning US$50,000 and this year her company won the Transform Africa award. Her impressive track record in ICT, in what many consider a man’s field, is just the tip of the iceberg for this saavy young entrepreneur.

Clarisse started HeHe Limited (meaning “where” in Kinyarwanda) in 2010 and firmly believes ICT is a woman’s game. “Being a woman in ICT sort of shines a spotlight on you, opening doors to many opportunities,” she says. The young Rwandan adds that most of the entrepreneurs she saw growing up were actually women, including her mother.

While still studying computer engineering and information technology at the Kigali Institute of Science and Technology, Clarisse founded HeHe with Mugarura Amiri, Ukwishaka Diane and Richard Mujyambere. The company now boasts ten employees and is building mobile software for clients such as the Nike Foundation, Rwanda’s Ministry of Youth and ICT and the Ministry of East African Affairs. 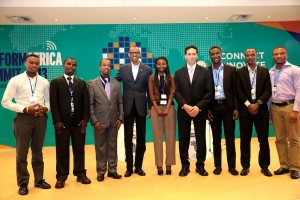 Despite less than ten percent of Rwandans having access to electricity, the country is ranked one the top places anywhere to do business. Rwanda was ranked 32nd in this year’s Ease of Doing Business R

eport and second in sub-Saharan Africa, being beaten only by Mauritius. Clarisse cites Rwanda as providing the perfect platform for her to start a business, saying that it cost her just US$10 to register HeHe. She says: “Entrepreneurs are celebrated here. They’re encouraged and the ecosystem is great to foster innovation.”

So what does the future hold for this remarkable young lady who in the last three years has graduated from university, started her own company and won three high-profile awards (she was also the winner of the People’s Choice Award that she received from President Kagame). Training the next generation.

“We’ve decided to train and equip the next generation of technology innovators in Africa. We will do this through a high school code club program that we have created in partnership with some of the world’s leading institutions.”

If you’d like to know more about HeHe Limited or Clarisse’s ICT for Girls Network, please get in contact with us.