Guns for Radios and Radios for Peace in Niger

A ground-breaking initiative initiative in Niger called Guns-for-Radios, exchanged 12,500 solar and wind-up radios for illicit small arms.  The initiative’s formal name was Radios for the Consolidation of Peace (RCP), and was a partnership between Lifeline Energy, (we were called Freeplay Foundation at the time) the UNDP and the Niger military.   The project aimed to disarm former Tuareg militants and encourage sustained peace and development in one of the world’s poorest countries through access to information. 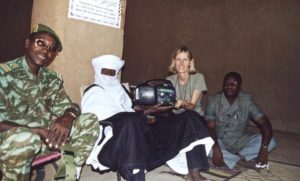 The radios acted not only as a powerful inducement, but also helped strengthen the country’s growing network of radio stations by providing thousands more listeners. This network is a powerful medium for reaching remote rural villages, with messages aimed at encouraging people to turn in illicit guns and to promote peace. 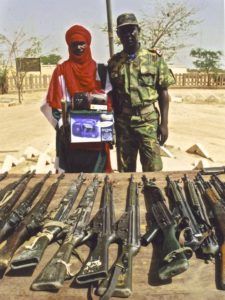 Radios for the Consolidation of Peace won a major Swedish sustainability award. The Partnership for Sustainable Cities Award was presented by His Majesty Carl XVI Gustaf, the King of Sweden, on World Environment Day (5 June 2002) to Kristine Pearson, executive director of Lifeline Energy, on behalf of the partnership in Stockholm at a gala ceremony.

RCP, launched in 2001, offered people in Niger the opportunity to exchange illicit weapons for wind-up and solar radios. In the project, the radios first were reconditioned and repaired by Nigerien women prisoners who developed new technical skills as part of their rehabilitation and integration back into Niger society. Then, through the Rural Radio Network (RURANET), villages and communities were informed about the initiative to collect and destroy illegal weapons. 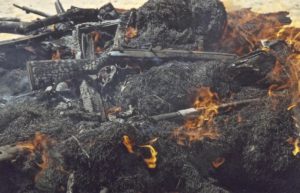 The exchanged guns were burned in a ‘Flame of Peace’ ceremony and the charred weapons of Russian, US, French, Italian, German and Egyptian origin were sawed into pieces by the military never to be used again. The traditional chief of northern Niger, the Sultan of Air, enthusiastically endorsed the project.  He also was a strong advocate of community radio.  He often broadcast messages on the community radio station in Agadez.

This was a fascinating story and project.  Read Kristine Pearson’s blog about the initiative and her being the first white person and outsider to ever meet with the sultan’s six wives.