The Many Sounds of Radio

My love of radio started in Mali in the early 1990’s in a small community station in Douentza in the arid Sahel, not far from Mopti.  Radio Douentza was one of the first independent community radios in Mali, operating on a very small budget, but creating impressive achievements and impact on the local communities. The radio station, with its solar powered transmitter,  operates against the odds in one of the poorest regions of Mali – itself one of the poorest countries in the world.

Since that time spent training Radio Douentza’s presenters, I have spent a lot of time consulting on, training, evaluating and generally promoting radio for development.  I’ve worked mostly in Africa but also in Asia, the Pacifica and in hospital radio in the UK.  Seeing the positive work of Radio Douentza in Mali was inspiring.  Radio is a precious tool for reaching and involving the poor and marginalised in development efforts: radio can save lives, it provides vital information to prevent disasters, promotes peace and ethnic tolerance, allows the oppressed to find their voices and identity, holds officials accountable and provide education, information, entertainment and news to the most far flung corners of our globe. 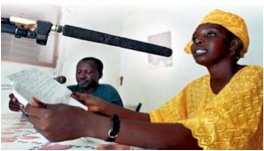 But today the news from Mali is not good, and I hear that Douentza, the place I stayed in the 90’s, has been taken over by Islamists and even bombed by the French.  I don’t know what has happened to the radio station or its staff… or its listeners.  No doubt that joyous Malian music it used to play was silenced months ago when the Islamists first rolled in.  And now, is it even still on-air?

Recently I’ve been working in the DRC  where, thankfully, there are still hundreds of radio stations on-air, and most of them continue to operate, albeit on shoestring budgets and on the good will of volunteers and the local community. But here, too, violence seems to be continuous and chronic, though less headline-grabbing than Mali and other places around the world. 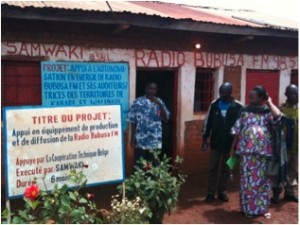 A report I have just been compiling about media in the DRC describes the casual everyday intimidation that local radios suffer in the DRC. For instance, a few months ago “Radio Télévision Lubumbashi Jua” was ransacked by a fanatical football team, calling itself the “Almighty MAZEMBE” whose chairman and sponsor is the Provincial Governor of Katanga.  This happened simply because the Governor had been criticized by one of this station’s presenters. This sort of casual violence by groups of hired youths is a regular occurrence in the D R C, and there is no redress because the courts are corrupt and those in power just use threats and gangsterism to shut down free speech.

So, as we celebrate World Radio Day on the 13th of February and all that’s good about the way radio has developed and is helping development and human rights, let’s not forget also how fragile radio can be, and remember all those in violent places like Mali and DRC who are bravely struggling to keep it open in the face of fanaticism, violence and vested interests.