A Response: From Nyamata to New York

This is a comment in response to Kristine Pearson’s blog about Rwandan head-of-household, Jonathan Macumi.

Their faces lit up when they removed their new radios from their boxes. The class, under Kristine’s guidance, turned the handles in unison and gingerly they switched them on to hear their own music, their own news and their own dramas. This excited group of 40 were gathered under the shade of a thorn tree to receive their solar and wind-up radios.

In those days I was Country Director of Refugee Trust International and we were working in partnership with then Freeplay Foundation (now Lifeline Energy) supporting Child Headed Households in the rural villages south of Kigali. 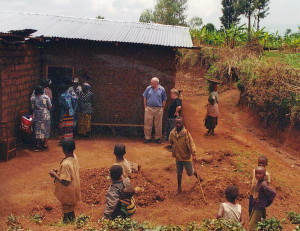 One boy stood out among the group of young teens. Hard-nosed aid workers have little time for sentimentality where the priorities and pressures are urgent and pressing. Yet, here was a young lad who could have been easily bowled over by his dreadful circumstances but he was succeeding through his boundless energy and infinite optimism. But he was only a lad of 13, caring for four siblings, so vulnerable and yet so strong, melting the hearts of all who met him with his impish smile and his bubbling personality. That boy was Jonathan Macumi

Indeed it is a long way from the bright lights of New York to the dusty back roads of Nyamata south of Kigali. Jonathan, whose image graced the digital billboard, was so typical of the many thousand heads of household in post-genocide Rwanda. Their future was as uncertain as the future of the post-genocide state. Thankfully, like the vulnerable nation, Jonathan has also made great progress.

I have tracked that progress over the years. My sister Helen and I visited in 2007 and we were able to build a new house for Jonathan and his family. The school we built in Myanga village in 2001 with eight classrooms and now has double that number. The dusty road south to Nyamata is now a paved highway bringing new development to the area.

Kristine and her team continue to support Rwanda. There is still so much to be done. As we approach the twentieth anniversary of the genocide we remember the many who died and we focus on the many ‘Jonathans’ of the new Rwanda.