Fatu is afraid to come to America. It’s almost too hard to believe, knowing what I know of her life. She’s stood her ground in the face of young weapon-carrying warriors in Kenya. She has been stoned by mothers for encouraging girls to play soccer. She has been threatened by fathers of girls she has rescued from child marriage. Despite the strength, the courage, the sheer force of will she possesses — she sees the writing on the wall, and it’s heartbreaking.

Walking into her office, you can’t help but notice an outsized, two-page newspaper spread celebrating the top 50 global leaders who use sport to inspire positive change in the world. Luminaries include David Beckham, Kofi Annan, Prince Harry, Desmond Tutu, amongst others. Right above the story of Mohammed Ali, I see the name of my dear friend, Fatuma Abdulkadir Adan, and why she was selected.

And precisely because of her name, her Muslim religion and her hijab, she’s afraid to attend the Street Football World’s board meeting in Atlanta in March.  Fatuma has just been re-elected to her second term. Luckily, the US Embassy in Nairobi has granted her a visa. Even if this wretched ban that America’s new president has tried to introduce fails permanently, the damage has been done.

For  two weeks in February, I travelled with Fatu as part of our effort to design a comprehensive audio learning initiative for pastoral Borana, Gabra, Rendile and Burji women, men and school children in Marsabit County, which borders Ethiopia. 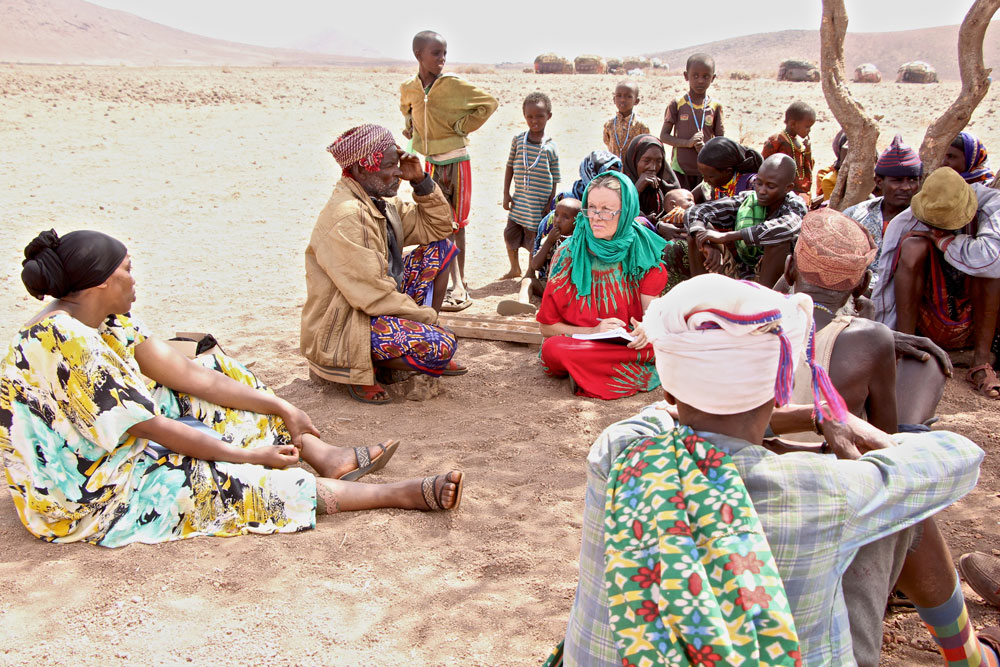 We’ve attended meetings in Nairobi, taken countless meals together, shared stories of our lives growing up on different sides of the world. Her in Marsabit, in Kenya’s arid north; me along the American River outside of Sacramento in California’s fertile Central Valley.  These conversations unfolded over dozens of hours as we journeyed from Nairobi to meet with schools and to sit on the ground with rural communities across Marsabit county, Kenya’s largest. The county is twice the size of Belgium, and boasts more livestock than humans (which number less than 300,000).

While in Marsabit, I met Fatuma’s three brothers (all professionals) and her mother (who made me my own kaftans to better cope with the searing heat).  I stayed at the family business, a charming small hotel, and was treated as if I was a guest in their home. Marsabit town is predominantly Muslim— yet as a blonde Westerner, I never felt unsafe. Quite to the contrary. One night as dusk fell, I walked some distance to an ATM to make a cash withdrawal. Frankly, I was far more concerned about the dust kicked up by vehicles speeding past than I was of being robbed. One morning, I found my hotel room key still in the lock outside my door where I’d accidentally left it the night before. A bottle of water had also been placed at my doorstep. Throughout my visit, not a soul I came across was ever discourteous.

We went for evening walks in the nearby forest where nearly every person we passed stopped to greet her.  I quickly realized that she had done something to assist each one of them, at some point, and in some important way.  Being a lawyer, she might have helped settle a dispute or sought justice for a child who had been abused.  We walked through a high school grounds where vulnerable children (whom she had rescued from destitution) were enrolled and were playing soccer after class. Some years ago, she started a program called “shoot to score, not to kill” to teach youngsters to play football and embrace teamwork instead of creating conflict, an ongoing issue in this highly resource-stressed area.  This programme has won numerous global awards.

Time and again I saw firsthand the results of her 15 years of her relentless commitment working with proud, traditional communities to take control of their own progress and development.  Creating practical, all-inclusive community leadership structures and savings clubs, and getting children into school, are at the heart of everything she does.  Local leaders, elders, and teachers all told me how she has made a positive difference to the quality of their lives.  Fatuma is a local celebrity.

And yet still, this peerless woman is afraid of being treated as a threat to society once she reaches American soil. No telling what harassment or verbal abuse that might be hurled at her from the airport, at her hotel, in restaurants, crossing the street. I feel helpless while outraged.

It’s more than the shame of knowing that America will never match the warm welcome her communities in Kenya gave to me. It’s the deeper, irreversible sense of shame. If Fatuma is too afraid to take her seat at the table at the board meeting in Atlanta, her individual loss will become a great loss for vulnerable girls who want to play sports around the world. Surely that’s too high a price to pay?