How the Lifeplayer Came About

Our Lifeplayer is a finalist in the INDEX: Design to Improve Life Awards. We’re honoured to be a finalist (in one of five categories) out of nearly 1000 global entries.  INDEX: is the world’s top award for designs that address humanity’s biggest challenges. For Lifeline Energy that challenge is delivering information and educational content to large groups of marginalized, isolated or displaced communities on demand. The Lifeplayer makes that possible.

INDEX:’s recognition helps highlight how trusted voices can effectively address pressing issues like literacy, health, hygiene, violence, rights, trafficking, environment and business skills training for the poorest.  The Lifeplayer is powered by solar and a wind-up crank, enabling it to deliver learning 24/7 to anyone, anywhere – democratizing knowledge. 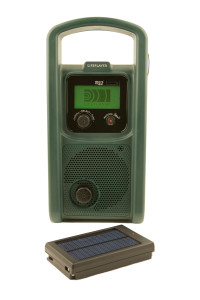 With advances in digital and media player (MP3) technologies, I knew designing a product that could be pre-loaded with huge amounts of content to be played over and over would be possible and practical.  If we got it right, it could be a game changer and impact millions. We tend to overlook that in the time of nano-technology, Internet, iPads, and Android phones, sometimes the power of the imagination sparked by a human voice is the most powerful.

For Lifeline Energy, the history of our product designs starts with stories of everyday life in rural Africa.  This is true with the Lifeplayer, a product that almost never came about.

When we began operating more than 12 years ago, we were working with original model wind-up radios.  Although they provided radio access to isolated communities, they would break if wound anti-clockwise. This was devastating to Rwandese orphans living on their own. As survivors of the genocide, having a voice on the radio they could trust meant so much. These children told me that they would listen to the radio from the time they woke up until they went to sleep. They were starved for information on current events: they wanted to know the weather and time; and practical information on the diseases from which they suffered, rape and violence against girls, farming, and life in general – all things that a family member would customarily provide.

Seeing the heartbreak that broken radios caused gave me the idea for a radio specifically designed for youngsters living on their own and for distance education. This flew against conventional wisdom, but it was something I deeply believed was needed and for which there was a market. These destitute and traumatized children were my compass; they told me what they wanted and needed and I set about making it happen.

Since its debut in 2003, the power-independent Lifeline radio has offered free learning access to tens of thousands of child-headed families and millions of children enrolled in radio distance education schools.

That said, as with every technology, there are limitations. A school may be located where a signal doesn’t reach. I recall in Pemba, an island off the coast of Tanzania, pupils weren’t able to listen to their school lessons for two weeks because the ship delivering diesel fuel to the community radio station didn’t arrive.  Or there was Mary, a Kenyan schoolgirl who missed four days of radio lessons because of her period. In South Africa, children in Kwa-Zulu Natal who lived on the wrong side of the stream, which became a torrent during the rainy season, lost weeks of schooling. If you miss a broadcast, it’s lost forever.

To begin creating the Lifeplayer, we wrote proposals and generated a design brief based on what teachers, content providers and community leaders told us they wanted. We sent proposals far and wide. A European government even agreed to fund it.  However, that fell through. Raising design and development funding isn’t easy at the best of times. In 2008, it was especially hard.  I felt very discouraged.

Then our US patron, Tom Hanks, changed everything. Not only did he fund our proposal, he enlisted his friends to support us.  Tom understands our technology and its positive impact on the poorest members of society. Having Tom’s financial backing was crucial, while his encouragement and kindness have been priceless.

I would be disingenuous if I were to say that it’s been easy bringing a design to market in this economic climate.  It’s not only been the toughest challenge of my own career, but also of its designer, Phil Goodwin.  Phil has had to work within a razor-thin budget to deliver a product that meets the expectations of end-users in some of the world’s toughest environments. He’s done it and he’s also been able to create an upgraded radio-only version of the Lifeplayer, called the Prime (which supersedes the old Lifeline radio).  Ultimately, he was able to design two products for the price of one, so to speak.

We believe that the Lifeplayer will enable poor children across the developing world achieve a more level playing field. Learners in the most remote schools who may gather under a tree still have to take the same exams as city kids with computers and electricity at home. Standardized school lessons loaded onto the Lifeplayer allows learning to take place when and where needed.
Another feature that teachers have told us they are excited about is that the Lifeplayer can record. They can record their own lessons in advance when they know they will be away from their classroom.

For communities that have lost everything, the Lifeplayer can disseminate important radio announcements to disaster or conflict-displaced populations, which also can be recorded for replay later. In addition, Lifeplayers can provide immediate psycho-social support and entertainment.

I feel profoundly proud as a small values driven organisation, attempting to correct the injustice of energy and information policy, to be recognised by INDIX:. This type of recognition of our work inspires us to strive even harder to fulfill our mission.

We salute the other finalists who also have been honoured.  I’m looking forward to seeing their designs and meeting the innovators behind them in early September in Copenhagen.