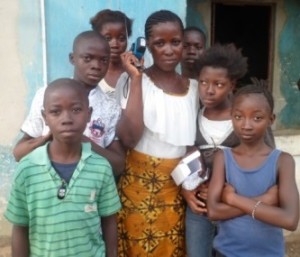 Fatmata is from Sierra Leone and is an Ebola survivor, a widow, and mother of three children.  Tragically, two of her children contracted Ebola, and she was accused of bringing the virus to her village. Fatmata is a recipient of one of our Polaris solar radios, which made a huge difference to her.

Time and again, the stories we heard were of people stigmatized because they’d contracted Ebola. Many people believed it was due to witchcraft, and people who’d caught the virus were rejected by their communities.

The role played by radio was critical in informing people about the virus: how it is caught and how it spreads. Playing jingles in local languages on community radio stations was a key way of helping to disseminate the correct messages, and reduce the stigma associated with Ebola.

The wonderful outreach work done by community radio stations, singers and the Ministry of Education solved one half of the problem of getting the right information to people. The other was making sure that people actually had radios to listen to; and this where our partners at Feba stepped in using their local partners – to provide solar radios to poor, vulnerable families, many of whom had had lost their main breadwinner.

When your choice is between buying food and buying batteries to listen to a radio, a woman will choose food every time. And that’s why our solar Polaris radios were so appreciated in Sierra Leone.

For Jestina, her solar radio has been invaluable: “We relied on messages from the radio but we only had one that was not good to rely on as I could not afford to buy batteries because I preferred feeding my family to buying batteries for a radio. I am especially happy that this gift of radio will help my children to listen to the teaching programme and also for the family to access information on Ebola.”

We are very proud that tens of thousands of our radios are bringing information access to vulnerable families in Sierra Leone.