Meeting Wives of a Sultan: a Story for International Women’s Day 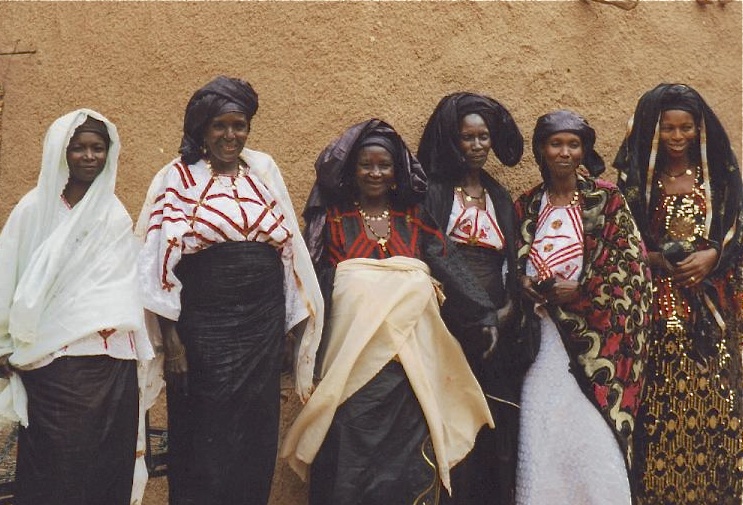 For International Women’s Day, I am sharing a story I wrote in 2002 about six extraordinary women that I had the honour of meeting in the once great Saharan trading city of Agadez. I met them where they lived – in a mud brick palace. What made this experience remarkable and still meaningful is that these women had not set foot outside the modest 15th century palace complex since their wedding day. What’s even more astounding is that I was the first Westerner they had ever met.

They were the wives of the Sultan of Aïr – a traditional leader of the Tuareg. His Sultanate covered a vast desert territory of northern Niger and included various Tuareg clans and other nomadic peoples.

Our initial meeting took place inside an oval-shaped reception room. Thin cotton fabric hung loosely over the mud walls; straw and plastic mats covered the ground. A light bulb swung on a bare wire from the ceiling. The wives sat on cushioned metal chairs while Mari, my interpreter, and I were seated on thin foam mattresses. Only when the last to arrive and senior wife, Asmaou, took her seat, were the introductions made, hands shaken and sugary drinks served.

The sultanas wore beautifully embroidered clothing and gold jewellery, which I thought to be their very best dresses and head coverings. When I commented on the beauty of their delicately carved jewellery, they giggled, smiled widely and said they were gifts from the sultan.

Mari communicated in Hausa (the lingua franca of much of West Africa) with their envoy, Saade, an elegant woman in her 30s and a niece of the Sultan. Saade then translated into Tamaschek, the language of the Tuareg.  Initially the conversation was awkward as they were clearly uneasy. Protocol dictated that only after the senior wife had spoken or passed on the question, would the others answer. At this point, I had no idea that they had never met an outsider.

We met again the following afternoon outside in a barren courtyard. This time they were animated and relaxed. I learned a seventh wife had died in the 1960s, along with her three children of an unknown illness. They told me that each woman had married the sultan around the age of 14. All practice Islam and come from different Tuareg clans. 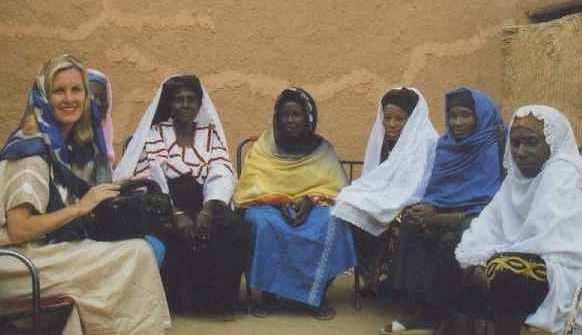 Asmaou, the senior co-wife had been married for 40 years; Mariama, the newest wife married 20 years ago and four others are in between for a total of 192 years of matrimony. The sultan selected his brides after seeing them as  girls around Agadez. Being chosen by the sultan brings great honour to a  family.

I learned that the selection of a wife is a collective undertaking. The sultan’s brothers and sisters discuss the merits of the potential wife and all must agree on her suitability. Wives generally have a voice in the selection of a new wife as well. Given their tightly cloistered lives, this would seem essential.

Multiple wives are costly and the sultan must provide for their every need. In centuries past West African sultans were wealthy merchants who traded in gold, silver, salt and even slaves. It was not obvious how the current Sultan supports his family and immense staff including many advisors, liaisons to various clans and brightly dressed guards. Tax collection, donations and the receipt of some government support was my assumption.

I asked if they live in a harem but they didn’t recognise the word. They told me they live in a zaoura, which means collective living. The women co-habit with their 21 children in the brown one-story diesel-electrified mud complex with cold running water pumped from a borehole. There were no palatial gardens. I spotted only a few trees and some yellow flowers.

In a city where temperatures can reach 50C, the women live collectively during the day in one large reception area, which I was not permitted to see. In addition, each wife has her own sleeping chamber and the sultan keeps a series of personal rooms – strictly off-limits to outsiders. Each wife visits the sultan in his sleeping chamber for one night a week. This was not a polite subject to pursue any further. 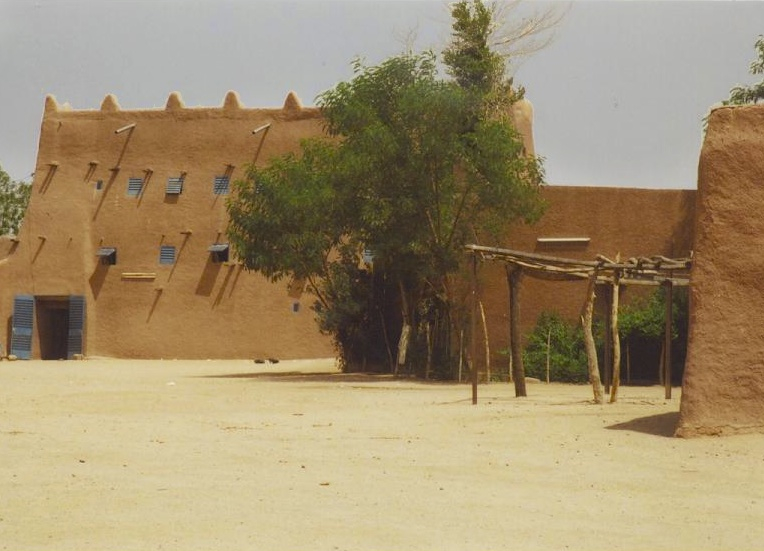 The children call each co-wife ‘mama’ and the other wives respectfully address Asmaou as ‘mama’. Every child is the equal responsibility of the sultanas and collectively agrees on the disciplinary action should a child misbehave. The children go to school and even attend university overseas. I was glad to learn that the women were confident that their daughters received the same education as their sons.

They said that they had people to help with household work, including sewing and embroidery. Their attendants are their own family members. Each of the wives’ immediate family works in the palace (left) and either lives in the compound or in a warren of houses adjoining the palace. Their privacy and safety is assured.

I asked what they did behind these walls, day in and day out, year in and year out.

Sometimes they watched a black and white TV that had only local programmes, but every day they listened to the radio. Like most people in Africa, radio is their primary source of information. They smiled and teased mama saying that she had a radio growing out of her ear, as she listened to her transistor all day long.

What women listen to and want they want to learn interests me greatly. Each woman told her responses one by one. The youngest wanted to know more about pregnancy, what happens inside a woman’s body when she is with child and during birth. She wanted to know more about baby care. They were unanimous in wanting more information about health, staying healthy, and diseases – specifically AIDS. I was surprised how much they knew about HIV/AIDS. Some said that more local and countrywide news was important, as they wanted to keep up with events, including political happenings. One was concerned about income generating work, such as handicrafts, saying that women needed more information about prices and costs so others won’t take advantage of them. Another said she wanted more radio discussions about young girls being forced into early marriage by old men and girls being either sold to or given in marriage by their families against their will.

I hadn’t expected them to be so well informed and engaged with an outside world from which they’d been excluded since their early teens. Their only first-hand exposure was to look out into Agadez, a city of 70,000, from the palace rooftop onto the monotone sand coloured and dusty city centre, where camels competed with cars and motorbikes. They had never eaten at a restaurant, visited a friend for tea, or bought a dress in a shop.

Except when one of their immediate family members dies, they are forbidden to leave the zaoura. Even then, they can only exit in their own compound accompanied by all the other wives, provided her family lives attached to the palace complex and they venture no further. Otherwise, a sister or brother attends a birth, wedding or funeral as her representative.

I asked many people in Agadez and Niamey, Niger’s capital, about the sultan’s wives and no one had met them or even knew how many wives or children he had. Most just guessed at four wives. A waiter at the pension where I stayed in Agadez said his friend was the sultan’s son, but he, too, had no knowledge of palace family life.

We outsiders would consider them concubines imprisoned without options. However, when I asked the question, “what if you could go outside the palace,” this seemed beyond their comprehension and something they had no interest in or desire for whatsoever. And I said “what if it was fine for you to walk freely around Agadez, even escorted,” their eyes grew wide and they shook their heads as if I had suggested that they fly to the moon.

They readily agreed to pose for photos. When I showed them their images on my camera, they were delighted. They had never seen pictures of themselves before, so I promised to send copies, which I did.

I left the zauora with a profound feeling of honour and respect, which I suppose is odd coming from a lifelong feminist. It is not for me to pass judgement of their lives, their choices, or the feudal system that governs them. What a deep privilege it was to have met these woman and for them to have accepted me as their friend.

P.S. Fourteen years later I still feel the same sense of privilege. The sultan passed away two years ago. I sent an email message in French to the sultan’s son who has taken over and I received an email reply the following day. The six wives are fine,  still live in the palace grounds and they asked when I would be visiting again. I’m hoping it will be later this year.