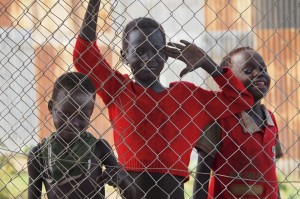 January 2014 update: Last year Kristine Pearson travelled to Juba in South Sudan to assist with the training of trainers in the use and care of our Lifeplayer MP3s. They were integrated into a teacher and learner education programme called South Sudan Teacher Education Program (SSTEP). At the time prospects for South Sudan seemed hopeful, although its challenges remained immense on every front.  With the latest outbreak of fighting and an estimated 400,000 displaced, it is unlikely that the primary education is continuing in conflict-impacted areas.

Countries like South Sudan, struggling to deliver quality education, are exactly why Lifeline Energy created the solar-powered Lifeplayer MP3. More than three quarters of South Sudan’s population can neither read nor write and according to the Overseas Development Institute and less than two percent have completed a primary education.  Even few have completed secondary school. Working with the Educational Development Center (EDC), our Lifeplayer MP3s were being pre-loaded with primary school content created by EDC and local educationalists.

After the Comprehensive Peace Agreement was signed in 2005, primary enrollment soared. Class sizes are the largest in Africa, with more than 100 pupils per class. There are acute shortages of classrooms, books, school supplies and teachers.

One of the programmes to help address the professional development of teachers is the South Sudan Teacher Education Program (SSTEP) — a three-year nationwide initiative funded by USAID and implemented by EDC to strengthen primary school education.  It will assist the Ministry of General Education and Instruction in the management of the overall education system, develop and shape policies, refine and mobilise a training curriculum, improve teacher performance and advance gender equity.

Our Lifeplayer MP3s, pre-loaded with an audio primary school curriculum called Learning Village was integrated into the SSTEP initiative. Learning Village, which covers Grades 1 to 4, was initially broadcast on 19 local radio stations; however, this has ended due to cost.  By utilising our Lifeplayers, not only will the programmes be able to continue, but also if a child misses a lesson, it can be made up. The MP3 function enables programmes to be played on demand. This is especially important in conflict areas or in places prone to flooding during the rainy season. It’s believed that tens of thousands of learners will benefit from this intiative.

Proportionately South Sudan has fewer girls in school than any other country and girls make up only one in four school children.  Although education is a priority, the government is struggling to build an education system in a country where most of its 10 million population live in rural areas and where many still experience displacement through ongoing conflict with their northern neighbour, Sudan.  Furthermore, the education needs of millions of adults who missed out on school also need to be addressed.

The teacher shortage is severe and less than 1 in 15 teachers is female.  Not even half of the teaching force have completed a primary education themselves, resulting in poor quality instruction.