Hannah Fitt, Director of The SAFE Foundation, and Habbiba Mackintosh, a volunteer at SAFE, for World Radio Day, 2013 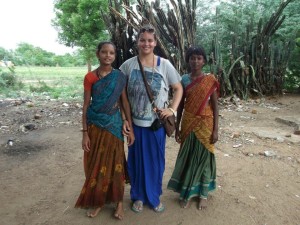 Back in 2010 we were working in India in the scrub jungle of Tamil Nadu. It ‘s a pretty remote, tribal region where the local people are used to making their home from branches and banana leaves. There’s not much contact with urban community and we found ourselves wondering how these people manage to stay reasonably aware of their political struggles and insight into their rights at a time when they are being displaced. When one local found a wire coat hanger on the ground and disappeared for several hours – we found the answer to our question. The intrinsic resourcefulness and need for knowledge had driven this man to make a basic but functioning transistor radio (with the help of the coat hanger) and he spent the proceeding days, along with the rest of his community, huddled around it absorbing the facts and figures around their struggles. That was the first time we had ever thought about the power of radio in a context like this – and how much it can transform lives.

As an international development charity, we spend a lot of time in areas of poverty and deprivation all over the world. It’s easy to see how human nature dictates an overwhelming demand for information, education and entertainment (what is Ghana without Afro beats!?) and the radio has always been a reliable and cheap way to access this. Whilst the radio may have lost some of its importance in first world countries to communication outlets such as the internet, mobile phones and television, it still has a vital role to play in bringing people together.

It remains the most pervasive, accessible, affordable, and flexible mass medium available, with virtues that make a significant difference for people that are living within remote communities that lack the infrastructure that we are used to. Low production and distribution costs have also made it possible for radio stations to focus on local issues, to interpret the world from local perspectives, and to speak in local languages which bring a sense of community that is important for many rural areas. In addition to being the only accessible mass medium for most people, it also fulfils a role as a sort of “community telephone” with several hours a day reserved for broadcasting personal messages, birth and death announcements, calling for emergency medical assistance and even for receiving personal medical advice from the local doctor. Whilst only a small minority have access to the internet in developing countries, such as only a fifth in Sri Lanka, nearly everyone has access to the radio.

And what does all this mean in real terms? Well, from first hand experience we can say that it brings opportunity, empowerment, an invaluable sense of community and hope….and of course there’s the Afro beats. Now what can be better than that?