Whether due to a natural disaster or conflict, displaced populations need accurate and trusted information that radio provides.

Survivors of humanitarian crises are forced to leave their homes with little more than the clothes on their backs. That’s true for Syrians escaping conflict, for families fleeing to a shelter before a cyclone strikes, or getting out of a house during an earthquake. Suddenly displaced, proud, hardworking people lose everything and require help for the most basic of needs: food, water, medicine and shelter. When disaster strikes, no less important is the need for information. Communication is aid.

No other medium is as powerful and as important during times of crises than radio. Radio saves lives.

Radio speaks to survivors in a language they understand. It’s an efficient and effective way to inform, in the quickest possible time. Radio broadcasts critical messages to survivors and helps humanitarian organisations with a coordinated response on the ground. In any emergency, rumours are rife, making the need for accurate and trusted information all the more important.

Natural disasters may not distinguish between rich or poor, yet the poor suffer far greater loss. Like we have seen in cyclone that devastated Beira, Mozambique. Cyclone Idai didn’t discriminate. The poor lost the few assets they owned. Their houses were make of flimsy materials. Families didn’t have insurance and may already have been experiencing health problems. The city and country lacked lacked the infrastructure necessary to deliver aid quickly and efficiently without international relief.

For more than 20 years years, Lifeline Energy has been involved in many humanitarian emergencies – the Mozambique floods of 2000 (picture above), the 2004 Indian Ocean tsunami, the post-election violence in Kenya, the Haiti earthquake, the Pakistan floods, the earthquake and tsunami in Japan, Typhoon Haiyan in the Philippines, the Ebola crisis in West Africa, the ongoing conflict in South Sudan and most recently in the Palu tsunami.

These calamities alone have killed hundreds of thousands and displaced more than a hundred million people. Some for short periods of time, while entire communities remain displaced for years.

In each instance we’ve provided either large solar and wind-up radios or portable self-powering radio-lights to displaced populations. LED lights are vital at night, especially for women and children. In some disasters we’ve been on the ground and in others we’ve worked through local aid organisations and international relief agencies. 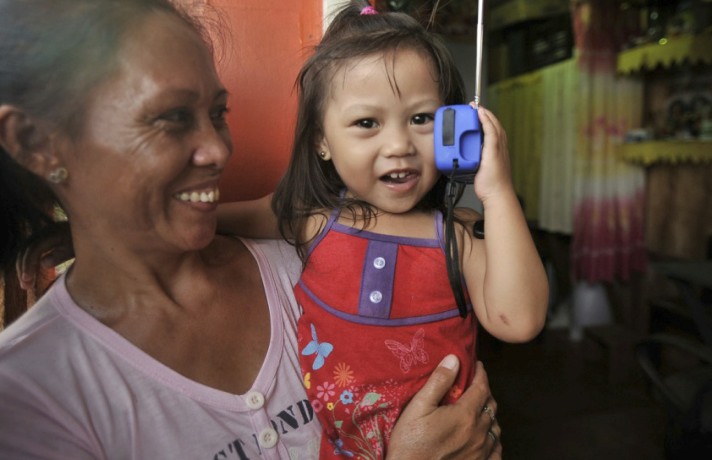 Why solar plus wind-up power is essential

In an emergency, having our solar radio that winds up is essential. If the sun isn’t shining, a winding system has proven time and again to be an important back-up power source. Offering displaced populations devices that need disposable batteries, which are unlikely to be available, is not sustainable.

People want and need information on-demand in a crisis. Where and when aid will be distributed; how and where to locate missing loved ones; where to go and places to avoid; as well as weather reports. One also cannot underestimate the psycho-social support that music provides. For example, in the Japanese tsunami, people also want updates on the status of the damaged Fukushima nuclear power plant’s radiation levels on a regular basis.

Responding to emergencies is one of the reasons that we created our MP3-enabled Lifeplayer. It can provide displaced populations with unlimited hours of educational and informational access anytime, anywhere, to anyone. Children can be organised immediately around lessons in their own language. Given its excellent sound quality, the Lifeplayer easily accommodates 40 or more listeners. Radio broadcasts can be recorded for listening later. People can record their own stories of their survival for generations to come.

Preparing for the next emergency

When a humanitarian disaster strikes, we’re immediately contacted by a host of relief organisations, the UN, corporates wanting to help or even national governments – all asking for our products right away. Lifeline Energy, a lean charity, or even our company, Lifeline Technologies, understandably cannot tie up its funds in inventory for disasters. Neither will our factory.

For years we’ve urged donors to fund a stockpile that would allow our products to arrive as soon as possible and not weeks later when vital information needs have been unmet and more lives may have been lost. Major aid depots are located in Dubai, Panama, Italy, Hong Kong and other cities around the world, which make dispatching goods a fairly straightforward process.

Lifeline Energy stands ready to work with others around the world to share our conviction to increase our disaster preparedness for the next humanitarian emergency, wherever that may be. ⬛

What we can offer for your communications initiative

Lifeline Energy does far more than design and  manufacture high quality off-grid  radio|MP3|voice recorders.  With 20 years of experience on the ground in Africa, as well as globally where there is emergency relief work to be done, we have an extensive network of partners. This enables us to assist you with multiple areas of your project [planning, implementation and management].

Needs assessments for your project

Customisation of the products, including packaging, instructions and labels

Pre-loading of content onto MP3 players via microSD memory cards