Displaced in South Sudan – A Visit With Dignity

It’s a place incompatible with human dignity. Some of the worst living conditions I’ve ever seen were in a crowded internally displaced persons (IDP) camp in Juba, South Sudan. The residents lost their cattle and land more than 20 years ago in the civil wars that displaced millions. Not a single house had a proper door. A piece of fabric covered doorways. One-roomed makeshift dwellings constructed from branches, cloth, tarp, reeds and whatever could be salvaged, house around 2,500 residents living in chronic poverty. There is no school, no running water and no electricity. 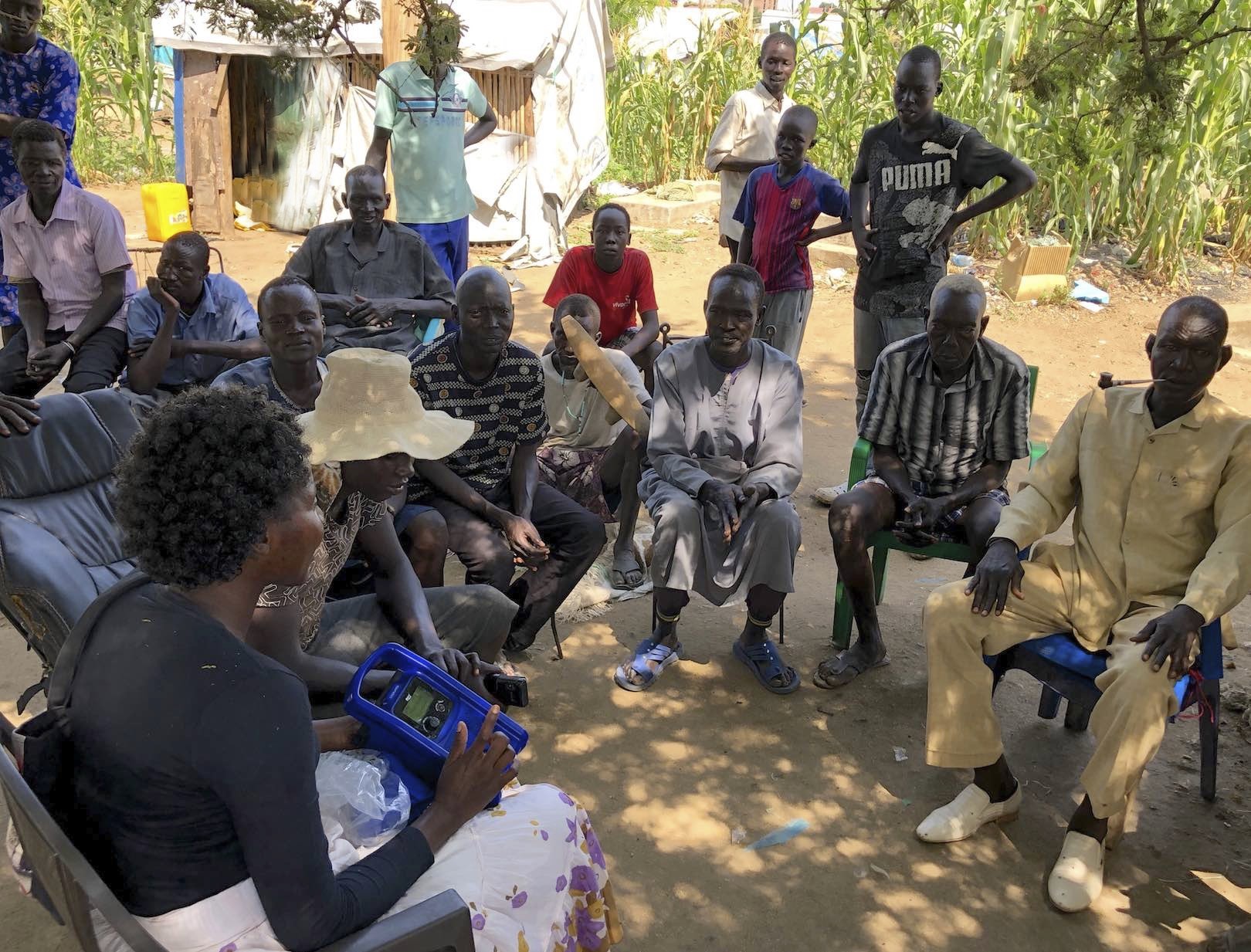 A meeting with the Mundari Chief

Under the shade of the only acacia tree, we sat on mended blue plastic chairs on the hard clay soil– a respite from the 36C heat. Through Agnes, Lifeline’s local representative and interpreter, we spoke first to the chief. Smoking a homemade pipe and wearing a custard-coloured safari suit and white shoes, he bore the distinctive v-shaped Mundari dot scarification marks etched across his forehead. The Mundari is both a tribe, one of 64 in South Sudan, and a Nilotic language.

Custom dictates a conversation with the chief first, but it was the women I really wanted to speak with. He would decide if we could continue any further. Soon other men joined us in an imperfect circle.

What I wanted to understand

Although Lifeline manufactures and distributes MP3 players and radios, from the onset I’ve wanted to understand the context in which radios are used and the practical impact that radio information has on the poorest, especially women. After Agnes explained what we wanted to ask, the chief gave us the green light. I posed the same questions I’ve asked groups of African women for two decades – who has radios, who controls listening, how often and when they listen, costs of batteries and frequency of purchase and to what extent battery dependency limits listening. I wanted to know about listening habits, new learnings, what they do differently because of listening to the radio and what they wish they could learn. Nowadays, I enquire about mobile phones.

This line of questioning has offered a fascinating window into the lives of people who live on the margins.

When I first began interviewing rural women, very few had any access to radio. It was the preserve of men. Few women earned any income and if they did, they didn’t buy batteries, men did. Women often shared stories of men putting batteries in their pockets before they left for the day, or getting beaten for listening because they “wore down the batteries”.

In this camp, gender didn’t seem to be an issue as much as economics. No women we spoke with had a radio in the home, nor did they know any woman who did. With only a handful of working radio sets in the entire community, women seldom listened. A few of the men had a mobile phone with a radio feature. When I queried how they get information or news of what is going on, it’s what someone else tells them or by occasionally listening to the news broadcasts at a nearby market.

Twenty years ago, when I asked women what they wanted to listen to the most, chances are it would have been information about health. And yes, these Mundari women said they needed information about health and hygiene. There are only drop toilets; they have to fetch water from the Nile several times a day and diahorrea and malaria are common. While at the camp, government health workers were testing adults for syphilis and other sexually transmitted diseases. So health concerns were on their mind.

But these women also wanted to learn about money and how to make it. The majority of women in the camp are illiterate, so their earning potential in an urban area like this is limited. South Sudan has world’s lowest literacy rate. Most women only spoke Mundari, whereas the lingua franca is Juba Arabic. The lack of village schools or war had prevented them from going to school.

I watched a woman weaving a basket from disused plastic rice sacks. Although she can barely count, her baskets are perfectly symmetrical and colour balanced. It takes her ‘from morning until night’ to make one basket, which she sells for the equivalent of $2. 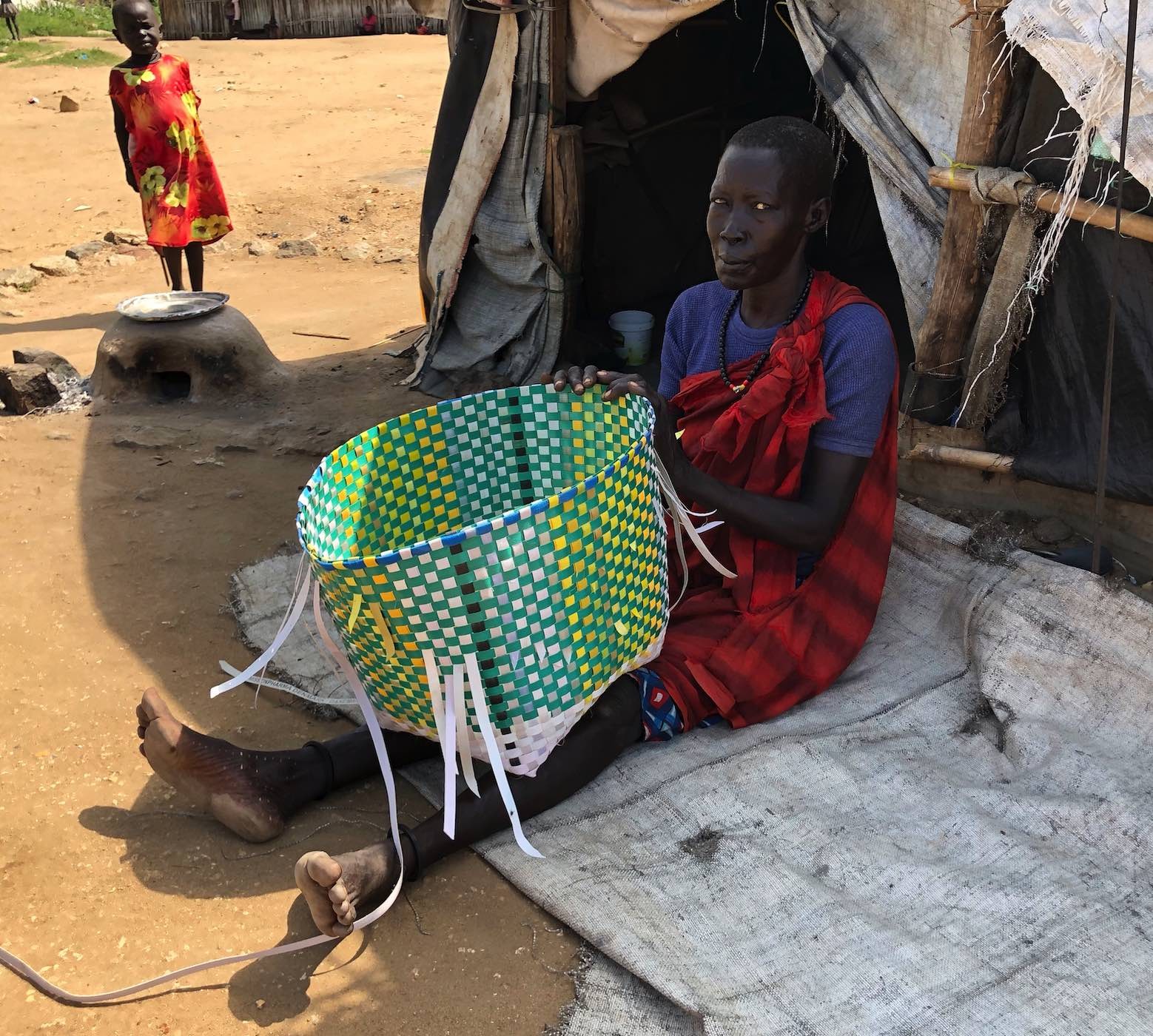 A basket being woven from rice sacks. 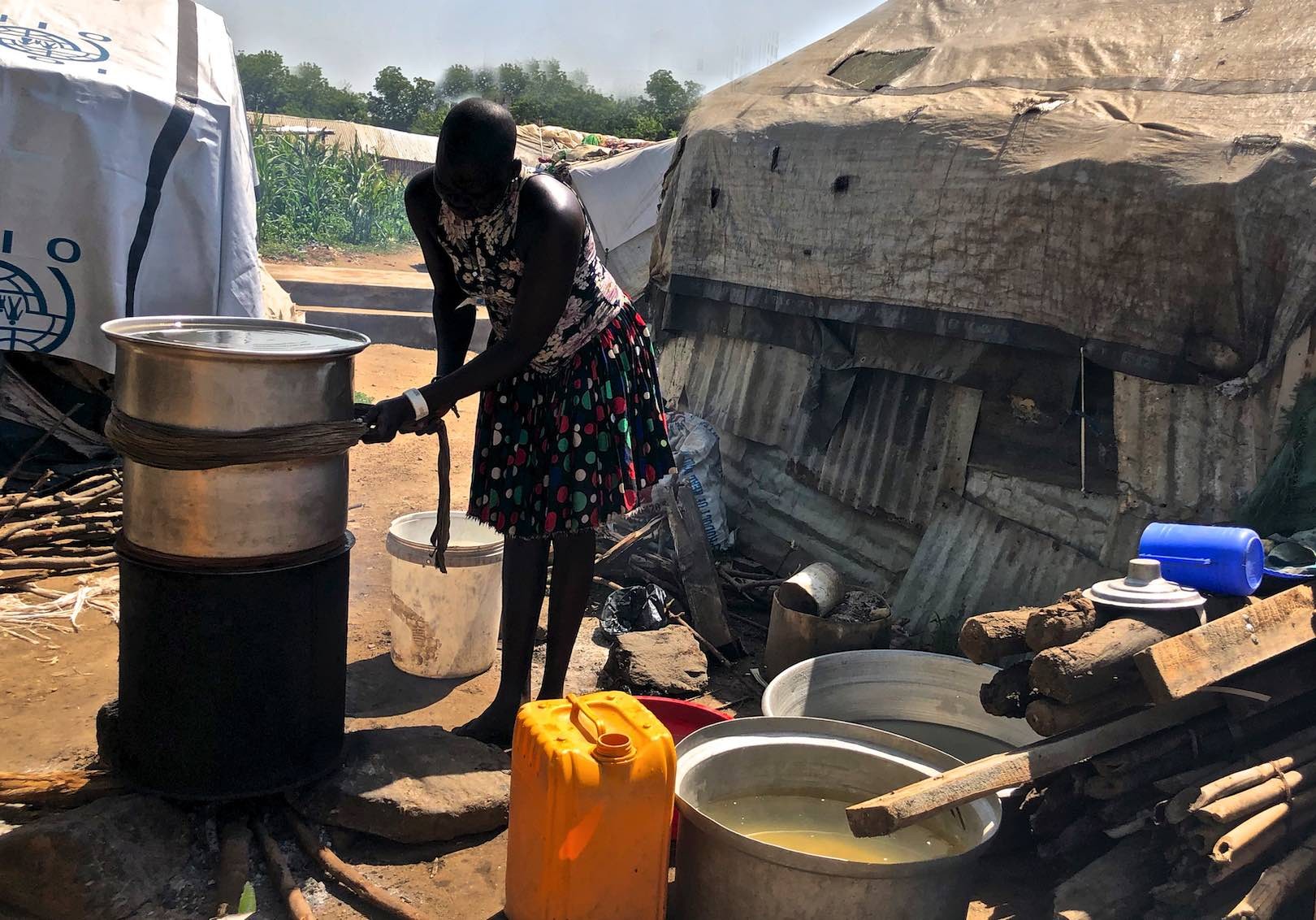 Making alcohol is an economic activity in the camp.

Another woman was making alcohol; what I would call moon-shine. It’s back-breaking work. She carries 20 litre buckets of water five times a day from the Nile, about a mile away. A few other women we met work in the city’s open air market helping others or cleaning up, but their economic activity is nominal. The women said they would like to learn to read money, signs and labels first to make a small business or have a skill like sewing.

Another hindrance to financial inclusion is that South Sudan has lacked a mobile money platform whereby people can transact over their phones to send and receive money. Overall mobile phone ownership in the entire country stands at 21% and that figure includes UN and NGO workers, while 95% is unbanked. The eight-year-old country has just launched its first mobile money transfer service called M-Gurush (m for mobile and gurush is money in Arabic). As has been proven in Kenya, when its local mobile money platform, M-Pesa, was introduced, increased access to a mobile wallet resulted in reduced poverty, particularly among female-headed households.

Elsewhere in Africa, mobile money platforms have gone hand-in-hand with phone ownership. According to the trade association that represents mobile network operators, GSMA, surveys in Africa indicate that informal work is a driver of phone ownership.

Listening to radio and owning a phone both help create new opportunities for women. Practical radio or audio content coupled with cell phone access will exponentially aid women in learning new information and building skills. With a mobile platform, they’ll have a far more productive, safe and reliable way to transact.

What Lifeline Energy can do to help

We are using what I learned to identify appropriate audio content as we introduce our solar-powered Lifeplayer MP3 into this camp and other impoverished communities in and around Juba. Health and hygience content already exists. We have access to basic literacy and numeracy lessons which are fundamental for a job. However, we may need to have a Kenyan financial literacy programme translated into Juba Arabic or even Mundari. We would also like to record stories of local women who have overcome obstacles and succeeded in getting jobs or setting up small businesses as positive role models.

It’s hard to imagine people suffering for decades with no clear path out of extreme poverty and no way to gain new knowledge to help improve their quality of life. Their living circumstances were wholly undignified, but these people were not. This visit reminded me yet again that throughout Africa some of the poorest people are the most dignified. I can’t say the same for many who are well off and lack dignity entirely.