The Hidden Cost of Cell Phones

By Kathleen Buchholz in Lusaka

The World Bank estimates that there are 62 cell phones for every 100 people in Zambia. This week as I interviewed students, their families and the community school teachers of Luba Community School for my research project, I struggled to find anyone who didn’t have a cell phone in their family. Yet I quickly discovered that owning a piece of technology does not automatically translate into the opportunity to use it. Time and time again each respondent laughed at my questions about their cellphone usage. 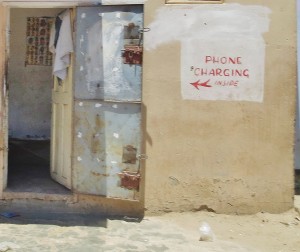 Very few people have electricity in their homes in Lusaka’s Garden compound. A compound is what other African countries might call an informal settlement or township. To charge their phones, owners deposit them at kiosks in the compound market for between one to five hours. It costs an average of one kwacha (US 20c) per hour. Owning a mobile means little if you don’t have the capacity to charge it. The phones I saw were old, handed down or resold as the batteries start to die. Then they must be charged much more often. Some mobile owners I spoke with charge the old phones three times a day.

For the residents of Garden, buying minutes or talk time is a daily activity. Time is sold in small increments according to what people can afford, which might only be one to six kwacha a day. For comparison, the current conversation rate is 5.36 kwacha to the US dollar. This amount may seem small, but it adds up very quickly throughout the month to make cellphones an expensive commodity.

But it’s not just the money that makes the phones costly. By leaving their phones for hours in an airtime kiosk, people might often miss out on important information. Soko Evelyn, one of the community schoolteachers at Luba, missed a job interview for a higher paying position with the government because her phone was at a charging station. Ester Mwanza missed a call informing her that her cousin passed away; she did not hear about it until after the burial.

Cell phones can connect people from all over so that they can share information and news. For those without access to a radio, television or the Internet it may be the only opportunity to reliably learn through an SMS what else is going on in their world. Yet having one piece of technology does not take away the negative effects of a deep energy deficit, and in some cases may even add to a financial one as well. So while there may be an abundance of mobile phones in Zambia, not everyone that owns one can actually afford to use it.