The Little Girl who Could

It’s one of the cardinal rules when you’re interviewing – detach yourself from the interviewee. Ask questions, take notes, but never get emotionally involved in the story. To put it simply, it isn’t professional to have a vested interest in the person’s life. I’ve always upheld this rule, that was until I met Nanjeke. 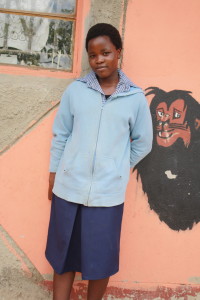 I first noticed Nanjeke at the back of the classroom at Moon City community school in Lusaka. She was well-mannered and exceptionally shy. When the teacher asked a question the other students squirmed in their seats hoping the teacher would pick on them, while Nanjeke would sheepishly raise her hand, copying the other students, but secretly hoping she wouldn’t be called upon. But there was no missing her – at just ten-years old Nanjeke was over five foot tall. In fact, she was already taller than me!

After class had finished I asked the teacher if I could speak to Nanjeke. She came over to me with her head bowed as if she had done something wrong. “So what’s your name?” I asked. Averting her eyes, she quietly responded: “Nanjeke. I’m sorry I just started school”.

Nanjeke lost both her parents when she was two to HIV/AIDS. At the time she was living in a rural area of Zambia. After her parents passed away she went to live with her grandmother. A few years ago, they moved to Lusaka to live with her uncle. It was then that she decided to take her future into her own hands.

“I told my grandmother I wanted to go to school after I saw all the other children going,” she says. With no money to afford school uniforms, supplies or the starting fee for Zambia’s “free” public school system, her family turned to the Moon City community school. The school was not far from her uncle’s house and a non-obligatory school uniform was provided along with school supplies. 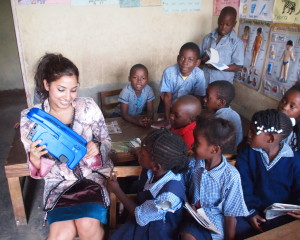 It has now been a month since Nanjeke started at Moon City. She may be shy but her skills are developing.

After ten minutes of asking her questions and her timidly responding, she finallylifted here head when I asked what she wants to be when she grows up. She emphatically responded, “I want to go to university and become a lawyer. I know I can do this if I do well in school.”

Out of many children I spoke to during my time in Zambia, Nanjeke’s story stays with me. Although quiet, she chose a new path for herself at such a young age. I am confident that she has a bright future ahead of her.

Uzma was in Lusaka observing the Ministry of Education’s Learning at Taonga Market radio distance education initiative in action. Lifeline Energy has been providing solar and wind-up radios to ensure educational access to all Zambian children since the pilot project was launched in 1999. So far 900,000 children have benefited from the programme across Zambia.

Lifeline Energy’s Prime radios are being introduced to the programme.