Video Didn’t Kill the Radio Star: Thoughts from an Irishman in Rwanda

Video certainly did not kill the radio star and the much vaunted demise of radio has just not happened.  Indeed radio, like cinema has flourished after the initial onslaught of television in the early sixties.  New media and new challenges face radio in a digital age and market dominated by the internet and web based solutions.  But for most of Africa and those in the developing world the transistor radio pressed to the ear is the ubiquitous image.

The high-minded model of radio espoused by the first Managing Director of the BBC John Reith: “educate, inform and entertain”, still has relevance in the era of commercial broadcasting and the public service model has survived into the digital era.  For most Africans the colonial and post-colonial era  radio stations such as the BBC World Service, Deutche Welle, Radio France, Voice of America provide services far beyond those any indigenous stations focused on.  Concepts such as fairness, impartiality and accountability were stressed in this public service ethos.  In the Cold War era radio was seen an intrinsic element of foreign policy with any development potential seen as a secondary spin off.

In the day to day struggle for survival in many parts of Africa, particularly rural Africa, Reithian concepts have little or no meaning. That does not mean the radio audience is not discerning and it recognises instantly what it likes to hear  and it knows what is good radio.  Like audiences elsewhere Rwandans love to hear themselves through their drama, music, debate and discussion.  The radio soaps neither patronise or preach but integrate into plots, sub-plots and character that which is most familiar: themselves.  With clever story lines agricultural advice is woven seamlessly into twice weekly episodes. Health advice is not pushed but is again part and parcel of the plot and debate, within the programme structure.  Debate and discussions rather than diktat is the preferred route.

But without radio receivers all the high quality programming in the world would just vanish into the ether.  The notion of having a radio in every room in the house, in the car or truck is a concept alien to so many Africans.  An old radio requires keeping it “fed” with batteries – a luxury beyond many.  The all-singing, all-dancing phone that is also a radio and MP3 player is a still a distant dream for so many.

Working in rural Rwanda in the years following the genocide I witnessed first hand the power of radio.  Radio was a force for evil in those terrible days of 1994. The then Government used the airwaves to foment hatred and division.  But radio could also be used to foster reconciliation, democracy and good governance.  The post-genocide generation now faced the HIV/Aids epidemic.  Child-headed households, with little or no state help or intervention faced a bleak future.  Both the local and international NGOs struggled to cope but with goodwill and much effort a corner has been turned. 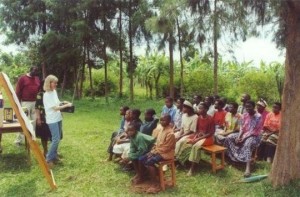 It would be foolish to ascribe to radio any notion of being a panacea. But as part of an integrated model for development, radio has been a game changer on so many levels.  Small things make big differences.  Can you imagine a farmer not listening intently to accurate weather forecasts?  Health advice is listened to because it is a matter of life and death.

Then, to the radio itself.  The simplest is often the best and when you have it right make it better.  The wind-up technology Kristine Pearson showed me in a Kigali hotel back in 1999 has certainly moved on.  It was very good then and it is even better now.  And you don’t need focus groups or action plans to tell you the joy radio has brought to rural Rwanda.  I saw the reactions, I felt the joy and I know that the simple invention of the wind-up radio has achieved so much.

The challenges facing Africa are changing with its climate.  And radio in its many guises will have a key role to play.  Sure, the technology will change and the radio programmes will be cleverer and better.  But without radio that does not need to be fed with expensive batteries, it could all be in vain.  As they used to say here in rural Ireland:  “Turn it on and turn it up”.

During his 25 year military career Frank Reidy served in the Middle East with the UN and in Rwanda on secondment to GOAL, an Irish NGO. A graduate in Communications Studies from Dublin City University, Frank lectured in the Irish Military and on retirement was a researcher and reporter with the Irish state broadcasting company RTÉ. While serving as County Director Rwanda for Refugee Trust International in 1999/2000 Frank implemented a radio distribution programme in partnership with Lifeline Energy. The programme focused on child-headed households and widows of the Rwandan genocide.  Project Muraho in 2004/5 brought Frank back again to Rwanda. In partnership with Care International and Frangipani, 7,200 of Lifeline Energy’s radios were distributed.