Why I Give to Lifeline Energy #WRD

When my mother died in 2006, she left me some money  ̶  not a life-changing amount, but enough to think about. If you have enough money to stay afloat, I find the most fun you can have with money is throwing it at things that matter to you and hoping it sticks. The word “charity” doesn’t really work for me: charity’s become synonymous with pity, and I don’t think I really pity anybody.

Rather, I see the concept of giving where good can be done as something else  ̶  maybe “constructive enabling” makes more sense. Where whatever I do or give can cause something useful to happen, I like to be in the game.

There will always be boatloads of aid for the major catastrophes, the tsunamis, the earthquakes, perhaps not enough, though there can never be enough. But there are the little causes, too, the niggling needs that, if met, create progress in the small ways that matter so much to life  ̶  to making it liveable, to making it better. Those smaller efforts, the ones that fly under the radar, are the ones that matter most to me. And often, when you think about them, the small causes aren’t small at all.

Education means everything to children, wherever they are, Eton or Ethiopia. But in Africa education, like water, is life. We in the West don’t understand what so many families sacrifice to find the $40 or $50 it may cost to send a child to school. And my husband, once a headmaster in Kitwe, Zambia tells an amazing story. He says that, in his day, a teacher only had to warn a mischievous child once: “If you do that again, I’ll have to tell your father.” Punishment didn’t get much worse than that, because not only would your father give it to you worse than any headmaster would, but if you got thrown out of a school no other school would take you. Education, they could learn the hard way, is life, and it could be lost so easily. I believe that, too, and where kids want to learn there have to be ways to help them do that.

For anyone wants to know more, there is a way to make a difference.

I found International Tom Hanks Day quite by accident, and (strangely enough) through Tom Hanks himself. I think I was looking up his Oscars. The search turned up a Kickstarter crowd-funding campaign for, no kidding, something called International Tom Hanks Day. I figured it had to be some kind of joke, so I looked it up, and it’s not only not a joke, it’s serious. But with a serious twist of fun. The money they raise goes to Lifeline Energy to provide an MP3 player/radio and it seemed like such a simple idea, but so potentially successful in reaching out to far-flung kids in Africa, that I wanted to buy into it right away. I got in touch, liked what I heard, and I’ve been solidly behind them ever since. 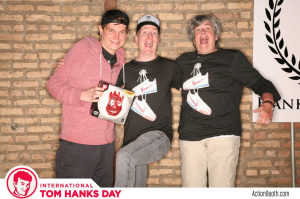 Last year I went to the flagship bash in Chicago, and lordy it was a gas! It’s just a huge party, a whole bunch of nice people having a great time, with an enormous screen showing non-stop Tom Hanks movies. You wouldn’t believe how many people know every line of dialogue from Turner and Hooch. About every five minutes a fabulously monotonous Tom Hanks chant breaks out somewhere in the room and everybody joins in. The four original guys who started up THD are everywhere at once, selling raffle tickets and making sure everybody’s having a good time  ̶  which is pretty easy  ̶  and generally being amazed that this silly thing they started as college bozos in Kalamazoo has raised thousands and thousands of dollars for Lifeline. They squeeze every penny out of it. This year I can’t go, but my heart (and some money) will be there, and on April 2nd I’ll be on a boat somewhere in the Atlantic, singing the idiotic “Tom Hanks” chant. It’s a long swim to Chicago!

How Tom Hanks got picked for this crazy annual shindig even he doesn’t know. But if you’re a Tom Hanks fan, or just someone who believes in below-the-radar causes (and I’m both), spare a thought for Lifeline. It has so very many thoughts to share.

You can’t solve the problem. You can’t make it go away. But you can whittle away at it, for a dollar, or ten, or 50  ̶  which will bring communication and information to a village or an over-crowded school.