A Classroom in a Microchip

As I sat down to write this blog on my last night in Zambia, I was plugged into my iPod listening to music. I skipped through a few songs until I found one that I liked. I adjusted the volume and pressed pause and got up to grab my laptop. Never once did I stop to think about how incredible it was that I could control what I listened to, how I listened to it, and when I listened to it. Even though I have been around MP3s for over a decade, it was not until I was introduced to Lifeline Energy that it occurred to me that they could be used for anything other than entertainment. As I sat staring at the tiny device in my had I was reminded of an experience I had had in Chikuni a few weeks ago… 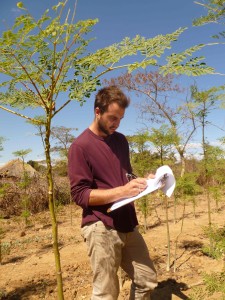 I stood before a silent and seemingly skeptical crowd of over 40 radio school teaching mentors introducing myself in what must have sounded like a very strange version of English. The mentors, from the 17 radio schools around the Chikuni Parish, some of whom had walked several hours to get there, came to watch a demonstration of Lifeline’s newest technology, the Lifeplayer MP3. Their eyes were fixed on the blue device in my hands; but to them, it must have looked like just a newer version of Lifeline’s radios that they’ve been using for years already.

After spending some time introducing the familiar radio components of the device, I switched to MP3 and pressed the ‘play’ function. The familiar Taonga Market theme song blared out and the formerly suspicious and quiet crowd erupted with excitement. They were completely caught off guard that they were hearing their lesson two hours before it was scheduled to be broadcasted by the radio station. I continued to demonstrate the functions of the Lifeplayer, including the rewind, fast-forward, and record. Each new demonstration was met with more applause. One man near the back even stood up and threw his arms up with excitement.

I asked the mentors questions about the Lifeplayer and how it would influence their teaching of the Taonga Market program. As expected, many mentors said they would benefit from the ability to pause and rewind the program. But I was particularly intrigued by the amount of other responses that these mentors, who had likely never interacted with an MP3 before, were able to come up with that we had not considered.

Many mentors said they would like to be able to listen to the program before class began so they could be more prepared. Others said that being able to play lessons again would enable them to help slow learners. Still others said that being able to play the lesson at any time in the cold season or during the rains would allow children to make it to class who would otherwise not be able to. As we passed the device around, the mentors’ eyes lit up and they smiled and whispered to their colleagues.

I was amazed at how they were able to grasp the potential for a technology that they had never seen before. Many of the mentors had expressed that they wished they could pause programs even before we had introduced the Lifeplayer, but now, they would carry on and on about how useful the Lifeplayer would be for teaching and learning. Each new visit for the next few weeks yielded more interesting answers and aspirations from the mentors we met regarding the Lifeplayer.

Here in Zambia, this MP3 device is more than a portable entertainment center; it is a lesson, an entire classroom, a future for a child. If these volunteer mentors can see the potential of such technology, I can only imagine what could be done with the next technological breakthrough. As I prepare to say goodnight to Africa for the last time, I know I will never look at my iPod the same way again.