A Tribute to Victor – a Hero of the Starehe Slum

Women and men who devote their lives to making a difference for others are publicly honored as ‘heroes’ by CNN, Time magazine, Skoll Foundation and others.  I believe that the real heroes are those unsung, unrecognized people living in the communities they serve and who are often live in poverty themselves.

One such hero was 31-year old Victor Ochieng. Victor had worked his way up from security guard to headmaster of Little Bees, a school built beside a refuse dump in Nairobi’s sprawling Mathare Valley slum.

In 2008 I was introduced to the much loved, irrepressible, larger than life, 60-year old Mama Lucy Odipo,  a community organizer and founder of the Little Bees School.  The school is situated in Starehe, a seven-hectare maze of rusty iron roofed shacks and shops, muddy alleyways and rocky streets. Mama Lucy received one of our radios through a women’s group and she invited me to visit the school. 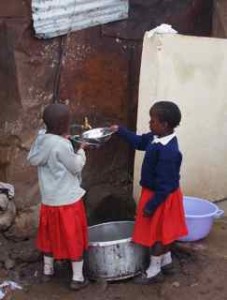 A colleague and I arrived to the parking area next to the sign (land) ‘grabbers will face necessary action’.  We walked down a slope criss-crossing the muddy, smelly stream of sudsy wash water mixed with raw sewage, which flowed into a narrow tributary of the brown Nairobi River that was choked with garbage.  We turned right into an unmarked dark passage just wide enough for two people and heard the sound of children laughing.  It was recess.

“Welcome to Little Bees, my name is Victor.”  A tall, thin man wearing khaki trousers and tennis shoes extended his hand to me with a smile. He told me that he was the head of security and proudly showed me around. Victor escorted me to the small playground, packed with children playing on equipment that included a rickety jungle gym, an upside down wheelbarrow and a seesaw.

On one side of the playground were sheet metal, dirt floored, sand flea infested, makeshift classrooms filled with second-hand desks.  Each classroom only had one small window. On the other side were two unpainted brick classrooms. I could see that they were building a second floor with plastic tarp walls. The children shimmied up and down a rough-hewn ladder as if it were stairs with a railing. It made me nervous, but no one else seemed to be. The toilets were overflowed, as evidently the municipality had not emptied them. Little Bees would be condemned in America or Europe.

Nonetheless, the 20 orphans taken in by Mama Lucy, some of whom are disabled, and the more than 180 day students, were as playful and full of life as any child in an upmarket school. They crowded around me and welcomed me with a song.  Their red and blue uniforms with white shirts were patched and mended hand-me-downs, most of which did not fit. Every day the children ate a hot meal prepared by volunteer mothers from the neighborhood cooked in a big iron cauldron over a wood fire. Although hugely under-resourced, the children were loved, fed and thriving. Victor adored the children and they clearly loved him.

Primary education is free in Kenya.  There is an acute shortage of schools in slums. Non-formal schools like Little Bees spring up to provide an education offered by volunteer teachers, who may not have a teaching qualification.  Victor told me how much they appreciated listening to the school lessons broadcast by the Kenya Institute of Education on our radio, especially for subjects like science and maths.

A few months later, I returned to Little Bees and Victor greeted me like a long lost friend, telling me that he’s ‘moved up’ to librarian and head of procurement. I had a Tom Hanks Day t-shirt with me given to Lifeline Energy by Kevin Turk, an American who raises funds for us each year through his International Tom Hanks Day fundraising event. It was too big for the children, so I gave it to Victor.

As I was taking some video, Victor reappeared in his new t-shirt and I casually asked him if he knew whom Tom Hanks was? He thought for a minute and said the he did not.  I asked him to guess.  Here’s the sweet video. 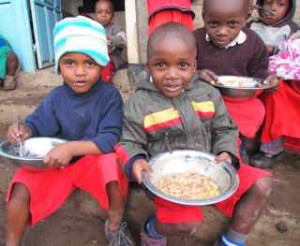 Over the next few visits, ‘Tommy Honks’ as Victor called him became an inside joke between us and we always laughed about it.

Last year in May, before the World Cup, I gave Victor a Vuvuzela in the colors of the South African flag. It was the first one that anyone had seen (other than in a newspaper) and Victor swiftly became the Pied Piper of Starehe. As he blew it and the children followed him around the school and into the street.  He was so proud of his new ‘trumpet’ and he loved entertaining the community.

Every time I’ve been in Nairobi, probably nine times in the past three years, I have visited Little Bees.  Each time Victor had been promoted – from security, to procurement, to librarian to social studies teacher, to deputy headmaster. Victor’s life was the school.  With each visit Victor proudly showed off his latest renovation. On my last visit he was being groomed to take over as headmaster, enabling Mama Lucy to slow down.

I emailed Mama Lucy in January to tell her I was coming to visit. She wrote me back and told me that Victor had been murdered.  He went out at night to buy medicine for his young son, Meso, when three thugs stabbed him in the stomach and snatched his cell phone.  He died later that night in Kenyatta Hospital.

When I visited Little Bees twice in early February, sadness filled the air.  I learned that Victor, who was survived by a young wife and two young children, was Mama Lucy’s fourth born son, out of 15 children. She had never mentioned that Victor was her child. She didn’t want me to think that he had been promoted out of nepotism, but instead because of his abilities, devotion and dedication to the children – the ‘little bees’.

Victor was buried on 12 February at his birthplace in Kisumu, in Kenya’s Western province at a funeral attended by hundreds of mourners.

How this slum school survives on so little is a miracle, but how it will survive without Victor I don’t know.

Living in a Nairobi slum where the conditions of life are unspeakable in 2011 – overcrowding, inadequate housing, the paucity of basic services, the lack of quality health care, combined with high levels of violence and insecurity  – where a life is reduced to a cell phone – is nothing short of a human rights abuse.

Please let us know if you would like to make a contribution to the Little Bees School, which can either be done through Lifeline Energy or sent directly to Mama Lucy.