When I returned to my Lusaka hotel room I looked like I had been dipped in charcoal dust. Although it was an inconvenience, the grime could be scrubbed off. But what I found hard to ‘wash-off’ was what I seen earlier that day.

Electrical transmission lines stretch far above the high-density settlement of Misisi, carrying power to more affluent parts of Lusaka and beyond. On the ground, children laugh and play with rough-hewn toys of wire, sticks and plastic bottles. A toddler naps on a disused sack at her mother’s place of work – surrounded by some of the biggest stacks of charcoal I’ve seen anywhere in Africa. The 25kg sacks are split up into small flimsy plastic packets which women then sell by the side of a charcoal-covered dirt road. 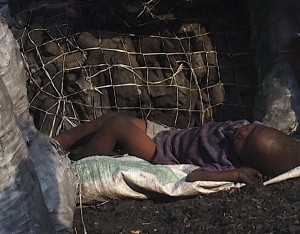 No one seemed to be bothered that everything, including their skin, hair, clothes and toys, were covered in fine black dust. It’s particularly humid today at 35C (94F), but it feels even hotter in this all-black environment. Even the air is sooty. These designated charcoal selling areas are unpleasant to visit, let alone to earn a living in; and they’re dreadful places for young children.

The women earn between $2 – $4 per day, which is more than they would make they tell me by selling vegetables. But it isn’t enough money to send their children to preschool or to hire a caregiver. And just about everyone in Misisi, one of Lusaka’s poorest compounds, with an estimated population of 85,000, uses charcoal for cooking. In fact, I was told charcoal is the second biggest business after selling beer.

I asked a group of mothers if they were concerned about their children playing in and around charcoal and to my surprise, they all said, “No”. Evelyn, who completed only four years of primary school, used to be a farmer in the north of the country. When her crops failed, she moved to Lusaka. She’s been a charcoal seller for three years. Evelyn told me with conviction, “Charcoal can hurt our chests when we breathe, but not our children. It’s fine for them. They don’t mind the charcoal”.  Ruth, a charcoaler of five years and a grandmother, is also an ex-farmer. She commented that she gets pains in her chest, but that it doesn’t harm the children. “It’s good for them because we use charcoal powder as medicine. We pound it into water and drink it for a bad stomach”.

I also asked about cooking with charcoal and breathing its smoke since most here cook their food inside, especially when it rains. It was disturbing to me that because of the medicinal effects of taking charcoal for stomach disorders, the women didn’t seem to realise it could be harmful to young lungs.  Numerous studies have linked high levels of indoor air pollution with an increase in the incidence of respiratory infections, including tuberculosis, pneumonia, stunting, low birth weight and cataracts in both in adults and children.

A field officer from the Ministry of Health told me that the government tracks and studies diseases like HIV/AIDS, TB, malaria, cholera, bilharzia, diarrhea, and nutritional deficiencies, but any effects from breathing charcoal dust or indoor air pollution from cookstoves on children aren’t among them. She also said that a high rate of illiteracy amongst poor women combined with a lack of awareness and education around health issues overall are critical problems in Zambia.

And with an urbanization rate of 3% per annum, demand for charcoal isn’t likely to decrease anytime soon unless the government dramatically ramps up reliable and affordable grid capacity to poor neighbourhoods. From everything that I’ve read and from everyone I’ve talked to in Zambia, this is not a priority of the Lungu government. The government’s environmental policies overall are weak. 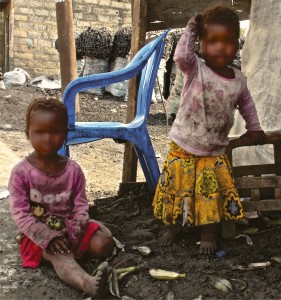 The Poor Buy what they can Afford

The poor buy what they can afford.  And charcoal is cheap – as little as 30 US cents to cook a meal of nshima, a ground corn staple in this part of Africa. Zambia has the second highest rate of deforestation in the world and thousands of people are involved in its production, transport and selling. So perhaps this cycle will only be broken once there are no more trees left from which to make charcoal.

In the meantime, how many charcoal children are breathing in this invasive soot and no one is paying  attention? As a mother  when your place of work is potentially unhealthy for your children, what alternative do you have? For women who live on the margins, their options are few and they choices they make are often the only ones they can.

So as I scrubbed my skin and watched the black charcoal water swirl down the drain, I thought about those who try to wash the charcoal off themselves as a daily routine. These young children make up many of the unseen human faces of energy poverty and those most likely to suffer its effects.

Charcoal – its production, sale and human cost is a highly complex issue.