In the United States, I often feel like I am being inundated with information: World news headlines on my internet homepage; breaking national news during my favorite TV shows; local news updates between songs on the radio; emails about classes; emails about meetings; emails about rescheduled meetings; emails about traffic advisories; and text message alerts from Campus Safety. It’s all helpful — but the quantity of it can quickly become really overwhelming. 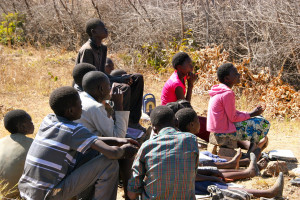 With as much information as I receive on a daily basis, I tend to think of this as the norm. However, in many parts of the world, access to news and information is not at one’s fingertips. In the past six weeks, I was able to see that this is especially true in rural Zambia. At times, it can seem like access to information is a privilege that some people are fortunate to receive, rather than something that all people might be entitled to — simply because not everyone has easy access to information.

That’s one reason why radio is so important, especially in rural areas where few people have electricity. In areas such as Chikuni, which has its own community radio station, news and information can be accessed as long as there is a radio you can listen on. Not only can people receive information, but programs and live debates that are recorded right in the villages by Chikuni Community Radio Station reporters give a voice to the community — even giving a voice to the most vulnerable people in society, such women and children.

While many families in Chikuni have radios in which they can listen to Chikuni Community Radio Station, there are also a number of families who do not own a radio. Not only that, but for many families who have working radios, its financially difficult to continually buy batteries to operate them. That’s why technologies such as Lifeline Energy’s solar powered and wind-up radios are so valuable. Even when it’s not possible to buy batteries, people can still access information on a solar or wind-up powered radio. This is particularly true in the Taonga radio schools, where a child’s education is dependent on whether or not they can hear a radio broadcast.

As the weeks went on, and we were able to talk to more people around Chikuni, it became apparent to me how truly important radio is in the community. People are able to access so much information from the radio. They get local, national, and world news updates, maintain Tonga culture and language through radio programs and songs, learn about a variety of subjects through different educational programs (such as the Learning at Taonga Market program or the agroforestry program created by Chikuni), as well as receive community announcements that help keep everyone in the community on the same page. The power of radio is truly incredible to me.

Now, as we’ve left Chikuni and are preparing to go home, I will think twice before I groan about having too much information thrown at me. Information is valuable and being able to access it is something to be grateful for.