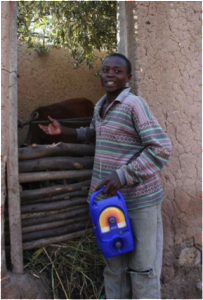 Fordward, his cow and his radio

When asked if he had to choose between his wind-up radio or his cow, he didn’t hesitate. Fordward, an 18-year-old Rwandan head of household said, “I shall choose my radio, because a cow doesn’t give me information.” He went on to say that he trusted the voices on the radio because no one he knew could give him advice and guidance.  Fordward became mother and father to his five younger siblings after his parents were killed in the 1994 Rwandan genocide. He was just 11 at the time and never returned to school.

Fordward was part of a programme that saw the distribution of more than 15,500 of solar and wind-up radios to child and widow-headed families in Rwanda between 1999 and 2011 through various NGO partners. Called Project Muraho (hello in Kinyarwanda) Fordward received his radio from our distribution partner, CARE Rwanda.

Providing radios may seem counter-intuitive in a country where radio was associated with hate messages broadcast by Radio Mille-Collines. The station helped fuel the most efficient genocide in history killing more than 800,000 Tutsi and moderate Hutu. Further, it left an estimated one million children orphaned.

There’s a positive back-story about radio in post-genocide Rwanda. And with the 25th anniversary of the genocide being commemorated for three months ending on 7 July, I wanted to share it.

How we got started in Rwanda 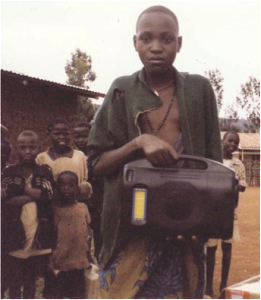 In 1999 not long after I started up Lifeline Energy (Freeplay Foundation back then) I received a letter and photo of a child holding an original wind-up radio. Sent by a student intern in working Rwanda, she wrote to say how important this radio was in the lives of child-headed households. It was the first time I’d heard that term.  The British government bought the radios for elderly survivors of the Balkans war. The conflict ended earlier than expected and they were sent to Kigali unbeknownst to us.

Shortly thereafter I saw for myself the impact of the radios. It would be the first of 46 trips that I would make to Rwanda over the next 18 years.  But nothing could have prepared me for what I experienced during my first few trips to the country.

In 1999 there were 101,000 child-headed families according to the government, 70% of which were headed by a girl.  Orphaned mainly by the genocide, children continued to be orphaned by HIV/AIDS given the alarmingly high rate of rape during the war. They were the poorest of the poor – vulnerable, often hungry, and malnourished. A UNICEF study revealed that 60% of these children did not care whether or not they grew up; 90% had witnessed an act of violence; and only one in 82 orphans attended school.

Child households weren’t always comprised of blood siblings.  Many orphans were placed into households from the same area by communities.  Children of a certain age were likely born from rape and abandoned.  Others, I learned through an interpreter, felt ashamed because they didn’t have Christian names. This indicated that they weren’t baptised and in their world meant they would never go to heaven.

These children were forced to take on responsibilities a child should never have to face. Most eked out a living by subsistence farming. The clothes they owned were those on their backs. They were often barefoot. Most lived in simple mud and thatch houses and slept on a mat on the ground. Without schooling or relatives to guide them they lacked the most basic information and knowledge.

I interviewed many child heads of households who’d received our radios from the NGO that distributed them. The most common comments were, “the radio eases my isolation; it makes me feel safe at night; it tells me things that parents would tell me; I never thought I would be rich enough to own a radio; the voices I trust are the ones on the radio.” These children needed practical advice on heath, hygiene, farming, livestock care, the weather and children’s rights. Programs in their own language, Kinyarwanda, did just that.

Twelve-year-old Claudine, and head of her family, said that until she had her radio she and her younger sisters were afraid to go to sleep for fear that soldiers would kidnap them. Rwanda was rife with rumours and conflict was still raging in neighbouring Burundi and the DRC. Claudine listened to the Voice of America and the BBC World Service, in the night and said she felt safe. 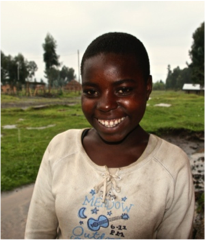 One of the most powerful stories came from Vestine outside Musanze in the north in 2009. Vestine, 15, received a Lifeline radio from our long-running program with CARE Rwanda .  They had invited 50 girls to a church hall to give feedback. I asked if anyone had a story about the radio that they wanted to share. Vestine was the first to raise her hand. “I used to be angry all the time and lay awake at night thinking of ways to kill myself because I was so depressed. When I got my blue radio, I learned that there were many other orphans and that I wasn’t alone. I heard about an association of girls like me on Radio Rwanda. We weave baskets together and share our problems.”

Over the years when I’ve asked Westerners what they think these children listen to, they almost always say the same thing – music. They imagine what their own teens would listen to. Music featured down the list and it was gospel music when it did. The most common answer was . . . the news. Still traumatised from the genocide, they didn’t have adults they could trust. Yet they trusted the voices on the radio to tell them what was going on the in the country.  And they trusted Paul Kagame’s voice most of all. 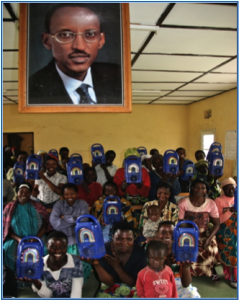 President Kagame’s role and radio cannot be underestimated. Over the years children have said how much they like listening to him. Thirteen-year-old Olivia who looks after her blind grandmother and younger sister, said “all the children love listening to President Kagame who tells them what the government is doing for them, how they must work hard, be honest and get an education. He told us that we are not Tutsi or Hutu; we are Rwandan. He gives us a lot of hope.”

President Kagame is often controversial, however, from my experience children who had no sense of hope for the future in 1999, were now filled with it . In large measure, it could be attributed to the president. His consistent messages, unwavering leadership and the results that Rwanda has achieved in the past 25 years, especially in education and in health, gave them hope for a better future.

What do you call this radio?

Over the years I’ve asked the children if they could give the radio a name, what would they call it. They’ve replied with: medicine for my heart; the blessed thing; the thing so you can be informed; the sadness cure; the one that brings us together; the one that never stops talking; and what helps to end my problems. To me, this demonstrates the deep value of radio.

Back in  2003 when we launched the first radio ever designed for children living on the, we called it the Lifeline because for them, it truly was. 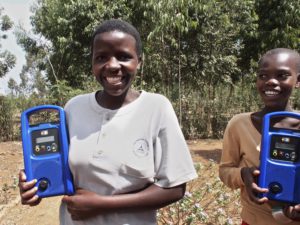 Clementine and Celestine with their Primes

In 2010 we debuted an upgraded solar and wind-up radio, the Prime, because it means foremost, primary, central. These radios have been central to the learning of Rwanda’s vulnerable children, in addition to providing psychosocial support. The psychosocial benefits of listening to trusted voices and messages that radio provides can be hugely comforting to those who feel isolated.

As we travel on an information superhighway; we think of technology to buy, use and discard. We covet the latest smartphone, tablet, Mac or PC with cool apps and software. Technology entertains us, occupies our time and teaches us new things.

But seldom do we view technology as our friend, our companion or “medicine for our hearts”. For me, this journey of understanding how important radio information is to those who live on the deepest margins has been one of the most profound experiences of my career, if not my life.

In distance education initiatives, one of our radios and now media players reaches up to 60 listeners. In Rwanda that number is much smaller. Maybe 15-20 children share one device. But nowhere have our radios been more impactful and made a positive difference. There can be no stronger endorsement than a young man saying a radio is more important than a cow.