Who Would Have Imagined Rwanda 25 Years On?

During April and May 1994 world headlines fixated on one event – the culmination of the long march to democracy in South Africa and the inauguration of Nelson Mandela on 10 May.  As Western media seem to feature one African story at a time, another African event was a footnote: an ‘African tribal war’ in a country not many had heard of – Rwanda.

In South Africa we were anxiously preparing for what we knew would happen – white rule would be crushed, the ANC would be swept into power and Nelson Mandela would become our president. South Africa was experiencing one of the most anticipated elections in the history of the modern world. More than 400 foreign correspondents were filing stories.  Many believed that South Africa was on the brink of civil war. But the cataclysm wasn’t in South Africa; it was further north.

I remember reading snippets about massacres in Rwanda. News flow was limited and the early days of the genocide were filled with confusion. Towards the end of April, when we were queuing to cast our ballots and usher in the ‘new South Africa’, we began to see the horrific images of the nightmare underway in Rwanda, a country the size of Massachusetts. But it was only around the time of Mr Mandela’s inauguration the first week of May that Reuters first defined the bloodletting as genocide and mentioned organised death squads. The Americans (under President Clinton) and British (under Prime Minister John Major) even tried to block the word ‘genocide’ from the UN Security Council.  Otherwise, under international law they would have had to act. This was neither Western politicians nor the UN’s finest hour. 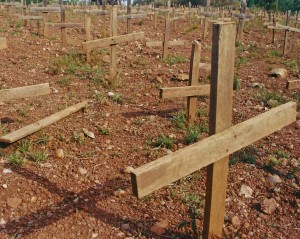 My first visit to Rwanda with its green and terraced hills was less than five years after the genocide. Lifeline Energy (then known as Freeplay Foundation) was a start-up. Despite having read extensively about the genocide, the experience was impossible to prepare for.  It’s still painfully difficult to forget.

The killing spree lasted 100 days, claimed 800,000 lives –  more than 10% of the population – and left a nation profoundly traumatised. No one was unaffected. Rwanda was then, and remains, Africa’s most densely populated country.

Kigali was eerily calm. Not much English was spoken, except by those who had fled to Uganda, mainly Tutsis displaced between 1959 and 1994. People were sombre. Everyone I met had lost someone. An aid agency staff member told me that 30 family members had been killed. He was still grieving.

Evidence of the war, as it was referred to locally, was still visible. Rocket propelled grenades and bullets pockmarked government buildings. The Umubano Hotel remained badly scarred. The Central Bank had been looted down to its last Rwandese franc and stood empty. The library had been torched. Kigali’s deeply potholed roads were a contrast to the main arteries linking towns, which remained in fine condition having been constructed by Chinese labourers prior to the genocide. In 1994 everything had been wrecked – and not just infrastructure – also schools, the justice system, agriculture, health ecosystems – and people’s lives.

Chain gangs of prisoners (called ‘genocidaires’) clad in baggy pink shirts and short pants repairing roads were a common sight. More than 100,000 men suspected of genocide crimes were crammed into prisons designed for 1/4 of that number.  Cash-strapped Rwanda had neither the institutions nor the money to deal with the number of prisoners. Many were put to work.

Most foreigners (muzungus) were aid workers. The handful of tourist-grade hotels and restaurants accepted only cash and electricity was erratic. A German-built brewery, the first colonisers of Rwanda at the turn of the 20th century, loaned Kigali water purification tablets when they ran out.

Beaten-up mini-bus taxis were largely empty as few could afford to use them. There weren’t enough cars on the road for a traffic jam to form. Bicycle taxis were the most common transport after walking. With fewer than 10,000 fixed-line phones, communication was difficult and cell phones, ubiquitous in South Africa, were still in the future for Rwanda.

An experience impossible to prepare for 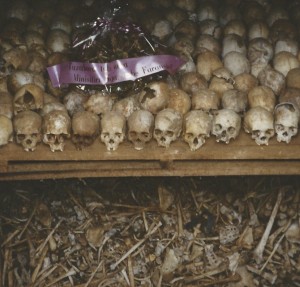 Back then, the provincial town of Nyamata was nearly a two-hour journey south of Kigali on a road so rutted a 4-wheel drive could barely climb out of second gear. En route we passed small cemeteries with rough-hewn wooden crosses. Prior to 1994 Nyamata had 64,000 inhabitants; afterwards its population was 2,000.

With a group of women mainly from other African states, we visited the Roman Catholic Church where an unspeakable massacre of 10,000 people seeking refuge took place. Outside was a staircase leading to an underground crypt. On each shelf were thousands of neatly arranged skulls. We were told there were a staggering 50,000 in total. My mind will never erase these images.

With tears rolling down our cheeks we listened to stories of survivors. A mother lay under dead bodies, presumed dead herself. Her entire family had been hacked to pieces and her children were in the pile of corpses above her. Many children had machete wounds visible on their calves or arms. An old man described how he had survived in an abandoned pit latrine. Another woman told how neighbours had hidden her for two months, but the man repeatedly raped her and she now had a daughter. She still lived next to this family.

Emergence from the abyss 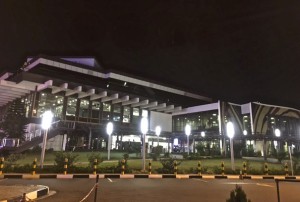 Over the past 25 years I’ve visited Rwanda more than 45 times. On a recent visit, I was blown away by the newly renovated modern Kigali International Airport. With the toughest environmental laws in Africa, plastic wrap around your luggage is removed and plastic bags are banned.  Arriving at night, workers were putting up signs and streetlights.  The Kigali Convention Centre and the 5-star Radisson Blu Hotel recently won awards for the Best Architectural Design and Best Hotel Development category in Africa.

Kigali is the cleanest city in Africa.  Its streets are void of trash, well-lit, with pedestrian pavements, drainage ditches and climate smart landscaping. Palm trees beautify the main street from the airport to the city centre. The traffic lights are what you’d expect to see in European cities, even beeping for the visually impaired. Now there’s traffic. And plenty of it. The new highway to Nyamata is a 30-minute drive.

Trendy coffee shops offering Rwanda coffee, some of the world’s finest, are commonplace. Ubiquitous ATMs are easily found and mobile banking is on the rise. The government promotes digital financial inclusion, especially for women.  This might seem minor, but one of the things that impressed me most were paper toilet seat covers in the ladies room at the Umubano. That to me is a real measure of progress and attention to detail.

A model for developing countries

The country’s astonishing recovery is considered a model for developing countries – when it could have easily gone the path of a Somalia. Often called a ‘country in a hurry’, under President Kagame’s decisive (and often controversial) leadership, its ambitious blueprint for growth and development is to become a middle-income country. Its key aim is to transform from an agrarian (82% of the population is engaged in subsistence agriculture) to a knowledge-based economy. In 2018 it was the world’s second fastest growing economy after Ethiopia.

With over 1,500 kms of fibre optic cables, smartphones work virtually everywhere. Data is some of the world’s cheapest and is one-tenth of the cost in South Africa. Even by 2004, cellular networks covered 100% of the country and my cellular reception was better in Rwanda than in America.

Rwanda boasts Africa’s highest school enrolment rates for both girls and boys. Major improvements in the health sector are extraordinary across the board and up to 90% of the population has basic health insurance coverage. To curb population growth, vasectomies are offered for free.

Another remarkable achievement is that Rwanda ranks number one in the world for female parliamentary representation – 61.3%. Half the country’s 14 Supreme Court justices are women. Women are involved in politics from village level to the Cabinet. A Gallup poll revealed that Rwanda is the safest place for females to live in Africa by its residents. It’s the African city that I feel safest in.

Not to say Rwanda isn’t without weighty challenges – endemic rural poverty, low and unreliable levels of electricity, serious environmental concerns like deforestation, a lack of media freedom and human rights. 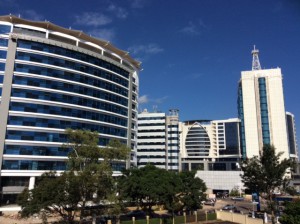 Collapsing into a failed state and a return to the killing fields were distinct possibilities for Rwanda even as late as 1998. Irrespective of what you think of the soft-spoken, iron-fisted President Kagame, his accomplishments are undeniable.  Relentless, disciplined and purpose-driven, Kagame used massive infusions of aid to reduce poverty, rebuild institutions and create stability. Acting more like a CEO than a democratic politician, Kagame continues to lead Rwanda on its growth trajectory into the foreseeable future.

That said, unlike in Rwanda, South Africa’s media and citizens have the freedom to publicly criticise the president and the government, many of whom were part of the ANC Cabinet under ousted former President Zuma.  He is under investigation for corruption in South Africa and by the US government.  And our courts have the freedom to prosecute politicians. Whether they’re found guilty and convicted is another matter, however.  At this point, that wouldn’t happen in Rwanda.

One has to be cautious about taking anything for granted, however, the chances are that the impressive gains made by Rwandans over the last 25 years have formed a strong and durable foundation on which to continue to build and innovate.  Rwanda is less and less defined by the genocide and increasingly by the progress it has made.