In Kenya the Power of Information Depends on – Power

Over the weekend I glanced at Twitter on my iPhone. I then switched over to Facebook and saw the same story. I quickly flipped on the TV, where I sat transfixed at the horrific events unfolding at Nairobi’s Westgate Mall. I called or emailed my friends who live in Nairobi to ensure they were okay, and thank heavens, they were. My colleagues and I were staying at an apartment 15 minutes from Westgate and yet it seemed a world away. 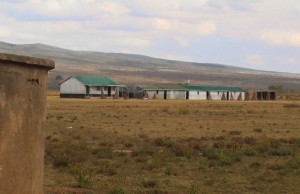 On Monday, my great friend, Agnes, a Maasai woman’s leader, escorted Kathleen, our intern, and me to a rural school on the dusty and treeless savannah. A few kilometres off the tarred road from Nairobi to the Masai Mara National Park, Oltanki Primary is named for the ‘one tank’ nearby that was used to store water for cattle.

Of the seven teachers at Oltanki, only a couple of them had heard anything about the attacks and didn’t have much detail. None of them have electricity or a solar panel at home. None own smartphones. They walk to work so don’t have access to a car radio. Some owned radios, but not the batteries to power them. The newly electrified small trading town of Duka Moja, where they go to charge their phones and socialise, lost its power on Friday night after a thunderstorm. It didn’t come back on until Monday morning when the teachers were already at school.

After spending several hours at Oltanki talking to the headmistress, the teachers, and learners about their successes and challenges in their four short years, we presented the headmistress with a solar-powered Prime radio. It’s the first ‘technology’ device they’ve ever had. She immediately tuned into the news. Like most Kenyans, they have friends or relatives in Nairobi and they were all anxious to learn more.

Even Agnes, who has a shiny new smartphone, lost her electricity on Friday and knew nothing of Westgate until Monday morning when she travelled to another town to charge her Nokia.

Our next stop was at a remote homestead, or boma of 15 family members and whose matriarch and gogo (grandmother), Senkeiyan, is in her 60s. She’s not sure of her exact age and has no birth certificate. Senkeiyan lost her eyesight 13 years ago due to a botched operation at a local clinic.

No one in her family knew about the attacks. Her son had a radio some time back but it broke and they cannot afford another one. Senkeiyan says she relies on her imagination now and gets her information from her sons and their wives after they go to town. She told me just because she’s old cannot see doesn’t mean that she can’t learn new things. 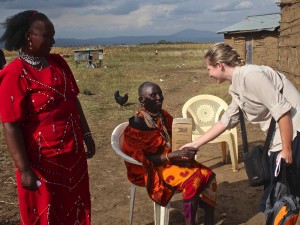 Lifeline Energy is in the process of creating a new media player and radio for the visually impaired and is actively seeking input of those who are blind. In exchange for her input, Kathleen and I gifted Senkeiyan a Prime radio, which she said would help ease her daily isolation. And she added that this radio would become a wonderful new ‘friend’ and she would no longer be lonely.

So as the world was glued to their Twitter accounts, Facebook, TVs and radios to keep abreast of events in Nairobi, I have to wonder how many Kenyans didn’t know that anything had happened.  They say bad news travels fast, but in Kenya news might not travel at all.

For 15 years I’ve seen right across Africa how something as seemingly simple as batteries (let alone a solar panel or grid electricity) preclude the poor from information access.  Rarely have I this as as powerfully demonstrated as in Kenya.  It’s easy to forget that information doesn’t reach everyone, and in Africa due to energy poverty sometimes doesn’t reach anyone.