Much More than Mentor to Zambian children

Tall, well-spoken and smartly dressed in a grey blazer, Christopher Banda, 21, proudly tells me that he’s studying at a technical institute to become a procurement specialist.  He credits his academic devotion to his teacher, Mwenya Mvula, and the solid primary school education that he received at radio school and the Learning at Taonga Market interactive radio instruction (IRI) programme.

The youngest of four children, Christopher was raised in a Lusaka township by his mother, a domestic worker. She was unable to afford to send him to a government school. Despite primary education being free in Zambia, buying a uniform, books and other items were beyond her means. 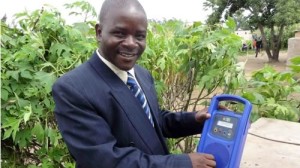 Radio schools don’t require uniforms or books. Entering Taonga Market in Grade 3, Christopher said that learning for him was enjoyable and he still remembers the Taonga Market songs.  A field trip to the international airport that Mr Mvula organised made a lasting impression because he met a pilot who had seen the world. Christopher added that Mr Mvula inspired him to study hard and to reach for his dreams.

The teacher isn’t a teacher, but

Mr Mvula is not a qualified teacher. He’s a volunteer ‘mentor’.  Trained in IRI methodology, he learned to use radio as a teaching tool.  IRI actively guides teachers and learners through lessons on the radio. As one of the first Taonga Market mentors who started more than a decade ago, he estimates that nearly 90% of his students have gone on to secondary school. This is an exceptional achievement as a significant number of children were orphaned.  Pupils in radio school, who may  learn under a tree, take the same exams as those children who have computers at home.

I first met Mr Mvula in 2005 when I visited community learning centres that used our radios.  Despite it being just a 20-minute drive from central Lusaka, the ongoing cost of batteries to power a radio were too expensive for this impoverished township. The electrical poles were visible in the background, but they didn’t light up this part of town. At that time one of his classes met in a one-room house; another assembled on the grass in front of a small maize field. Now they have small, dedicated classrooms. His enthusiasm for the programme, his pride in his work, and his love for the children were as palpable then as they are today.

The 46-year old Mr Mvula grew up in Katete, a farming village near the Mozambique border. In 1991 he headed to Lusaka to seek a better life and where he married Monica.  They have six children and one grandchild.  Mrs Mvula makes and sells chipati bread and sweets along the side of the road. Although he tutors students in the afternoon to earn income, sometimes parents can only afford to pay with vegetables or a chicken.

Mr Mvula has encouraged hundreds of young learners over years to strive for their dreams.  He’s not giving up on his own dream either, to qualify as a teacher.

Please consider supporting a Taonga Market classroom by donating a Prime or a Lifeplayer MP3.