Rwandan teenager Delphine first learned about ‘sugar daddies’ – men who prey on girls – listening to a soap opera drama on her radio. Before tuning into the show, she couldn’t have imagined such a thing. Along with her brothers and sisters, Delphine says that her big blue sun-powered Prime radio helps keep her informed of important issues. Reliable information is hard to come by for Delphine, who at 16, is mother and father to four younger siblings. 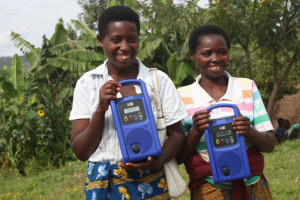 Sometimes she goes to a neighbour’s house, a ten-minute walk away, just to hear the news and weather reports. Fetching water and firewood, tending to the garden and cooking are priorities as they enable the children to remain in school.

Delphine says that the radio has been a great friend to her and now many other children come to her house to listen. Musekeweya, a soap opera drama, is her ‘most favourite’ programme.

In the show characters grapple with revenge, greed, hate, exploitation, revenge and murder. Even though half the population is under 18 and weren’t yet born, they live with the legacy of the 1994 genocide that profoundly touched every Rwandan. A popular soap like Musekewya, addresses the underlying issues of incitement and that foment conflict. Dealing with trauma and healing are also woven into the storylines, providing examples of how to successfully resolve differences through dialogue and understanding.

Delphine is one of hundreds of child heads-of-households who received a Prime radio last year. Her comments mirror those of thousands of other vulnerable child families who have received our radios in Rwanda since 1999 when we started working in the country.

Radio remains the most important communication medium in Rwanda, especially in rural areas, where illiteracy is high. For child families, buying a radio and batteries to power it would be well beyond their means. Lifeline Energy works with local organisations that support child and widow-headed families.