Radio Without Broadcasting: Hope for the Unschooled

Zambia is one of the poorer countries in Africa, but it is a country with hope. On a visit to a Lusaka compound (informal settlement) in Lusaka, I encountered poverty that was palpable: dirt streets, miserable shelters, no electricity and poor kids everywhere. I also encountered hope. Godfrey was a preacher/teacher in a small Baptist school with four packed classrooms, volunteer teachers and minimum amenities. I would have been depressed had it not been for Godfrey’s enthusiasm and showmanship. He seemed to radiate hope and that is what he communicated not only to us, but to the students and volunteer teachers. I left the township with something I had not come with. 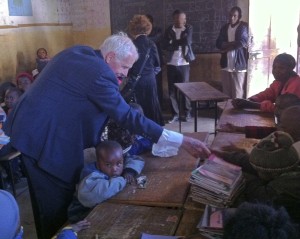 In the early 2000s there were about 800,000 school-aged children not in school in Zambia, which is a drag on future opportunity for them and the future growth for the country. A dozen years ago, a program called Taonga Market began to confront this problem by introducing a proven strategy called Interactive Radio Instruction or IRI for out-of-school kids. By 2005 the program had created hundreds of “schools” using classroom radios to provide all of the elementary grades for more than 60,000 of these kids a year without schools. Rigorous testing showed that these groups of students who gathered under trees or in poor shelters could learn even without paid teachers. Once the funding to create this national system ended in 2009 and the overseas experts departed for home, the onus to keep the system going – and growing – fell on the Ministry of Education’s Education Broadcasting Service.

Things continued well, then at the end of 2012, the national radio station ZNBC that aired the IRI lessons cancelled the IRI service because broadcast costs had not been met by the Ministry of Education. Suddenly,  60,000 students had no instruction. For some, nine community radio stations continued broadcasting, but it did not cover everybody, and besides the community radios had to bear the costs of broadcasting too. What to do?

Things are being worked on from several sides, but one solution that may save a promising system is actually at hand. Lifeline Energy had supplied the radios for most of the IRI schools over the past decade, but they were silenced when ZNBC pulled the plug. Lifeline’s radios had overcome a major problem of lack of electricity by having both windup and solar panel technologies. A newer version adds an MP3 capability, and this change may help save the Taonga Market project and allow more of the hundred of thousands out of school kids to have a chance. MP3 capability means that you can have ”radio without broadcasting.” It sounds contradictory but it helps solve the cost problem of broadcasting whether for national radio or even for community radios. The new radios can load the entire year’s content onto the new model and that allows the local mentors (volunteer teachers) to play the lessons without depending on no or weak signals from broadcasters. Community radios (like the very well-run Chikuni radio that I visited in July) could continue to broadcast the lessons or add supplementary content-as Chikuni does with its agroforestry program for schools- or other life skills lessons. So what are the prospects for resolving the problem and keeping a critical lifeline for the 800,000 kids without schools?

The answer may be whether the Ministry of Education and the Zambian government sees the Millennium Development Goal of universal primary education as feasible. Zambia has the chance to be an example of how a poor country can achieve the goal that many have little hope of achieving in the next few years. It will take funding, of course, to purchase the new radios and eventually incorporate the IRI schools into the national government system, but it seems to be a much more cost-effective way to work on the problem. And I think of Godfrey and his infectious sense of hope against daunting odds and am convinced that he represents the national sense of hope for the rising generations.