August is Women’s Month in South Africa. In honour of this, Kristine Pearson shares her story of a special South African friendship.

nn pothe me a suit andToday is National Women’s Day in South Africa.  It marks the day in 1956 when 20,000 women from across the colour bar descended on the Union Buildings in Pretoria. They marched in opposition to the dreaded apartheid pass laws. For me the day has deep personal significance.  It was the day that one of my dearest friends, Feroza Adam, died from a car accident in 1994 right before her 33rd birthday. We had a highly improbable friendship.

In January 1989 when I emigrated from America to South Africa, the country was an international pariah. Back then I didn’t begin to understand South Africa’s complex layers.  Therefore, I believed that I could best learn about South Africa from the perspectives of its women. From the get-go I met with women’s groups around the country – the resistance organisation the Black Sash and the political ANC Women’s League who were fighting for freedom and democracy; the conservative Afrikaans women’s organisations dedicated to preserving the status quo, and many that were somewhere in between. But all were concerned with a spectrum of issues facing women.  At a meeting of wealthy English-speaking farmers’ wives in Nelspruit, I was served tea with pink lace-trimmed cotton napkins by a black waiter who wore a suit and white gloves. In the sprawling Soweto township I met with churchwomen who served tea in a chipped tin cup.

It was in this context that I was invited to attend South Africa’s first women’s conference that brought together women from right across the political spectrum in the then so-called independent “homeland” of Bophuthatswana. Hosted by the Institute for a Democratic Alternative for South Africa (IDASA) at a hotel outside of Mafeking, this conference would have been illegal in South Africa as the state of emergency was in full force. We were assigned roommates.  Mine was a large and fierce Xhosa activist from the Eastern Cape.  She told me that she hated Americans, although I was the first one that she’d actually met.  I couldn’t blame her, really.  Every American administration had supported the apartheid government. I apologised a lot.

The 200 delegates were divided into groups with a facilitator who carried a box of tissues. Each woman told her story. One was an Afrikaans mother whose son, a member of the security forces, had been killed in a township; another was a Zulu woman whose son had been killed by the security forces while in detention; one was a posh red-headed English-South African who headed a businesswomen’s association; another was a leader in the trade union movement for domestic women.

And then there was Feroza 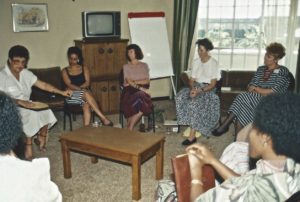 Feroza started by saying she’d been hiding in a white woman’s  house from the security police for the past five months.  She told how she had grown up in the Indian township of Lenasia, became an activist as a student, trained as a teacher, and had joined FEDSAW, the Federation of South African Women.  I remember being transfixed as she told about her days in jail, being beaten by the cops and her fear of dogs. More than once she had been attacked by police dogs and had the scars to prove it. The ANC had sent her to Moscow during the winter for training.  Secretly, she had made her way to Lusaka, Zambia to meet with the ANC leadership in exile.

She was engaging, brave, passionate and very loud.  Feroza had unruly long black wavy hair, wore dangling earrings and smoked Camel filters when no one was looking. I told my story of growing up in suburban California, of Gloria Steinem (whom they had never heard of) being my role model, travelling on my own around the world and emigrating to South Africa. Surely, they wondered where on earth the organisers found this woman who knew embarrassingly little about South African politics. My life seemed disconnected and purposeless in comparison. I wondered what I stood for.  I felt ashamed. We used all those tissues that weekend.  It was an extraordinary once-in-a-lifetime experience – for me at least. We said our good-byes. This conference changed my life. It was my own personal rubicon.

The ANC is unbanned

In February 1990 the ANC was unbanned. Nelson Mandela was released from prison. I was there when he made his first speech from the top of the steps Cape Town’s City Hall with the then union leader, Cyril Ramaphosa holding the microphone. Later that year I moved from leafy Cape Town to energetic Johannesburg.  One afternoon I walked into a meeting about the formation of a national women’s coalition. There was no mistaking that infectious laugh. It was Feroza. We hugged.

Despite being a brilliant activist and freedom fighter, she didn’t drive, so after the meeting I took her home.  She claimed that she was too busy to take driving lessons. That night in her flat we talked for hours. It was the first of many long conversations about feminism, political activism, the ANC, America and dating. We were both single. As a friend, she was a master’s class.

The winds of change were blowing at hurricane force in South Africa.  Feroza and I attended women’s conferences, rallies and protest marches. If my learning curve had been any steeper, I’d have fallen over. We travelled around the country with me behind the wheel. I often played a Peter, Paul and Mary cassette and specifically the song If I Had a Hammer, which annoyed her immensely.  It sort of became our theme song.

Over the 1992 Christmas break, we drove to Cape Town for three weeks.  On New Years’ Eve we stopped by a party she’d been invited to and we met a man named Rory Stear and left. By then I was an executive with a large banking group, Nedcor. Given her fierce intelligence coupled with her charismatic personality, Feroza was appointed to the ANC’s public relations department helping to shape its new public image under Ahmed Kathrada (aka “Kathy”)   On a sunny Saturday afternoon in April 1993 she called me in tears to tell me that Chris Hani had been killed.  We spoke for two hours.  Was the country now going to slide into civil war as so many had predicted? 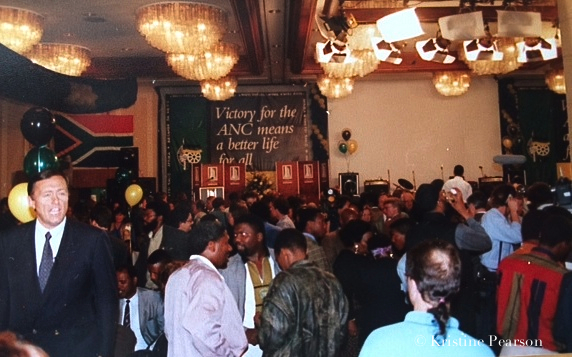 The ANC victory party at the Carlton Hotel. 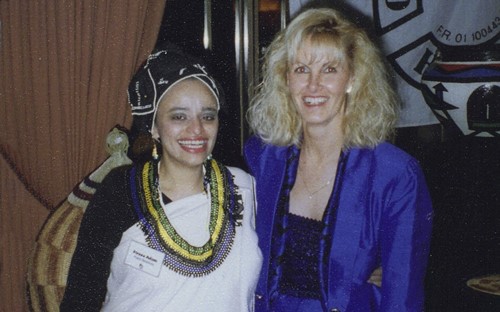 I’ll never forget that cold winter Monday morning in my Johannesburg office on 8 August 1994 when I received a call that Feroza was in critical condition at Groote Schuur Hospital.  Now a member of Parliament, but still a learner driver, she had driven a rental car the wrong way onto a freeway exit.  I dropped everything and drove straight to the airport to catch the first flight to Cape Town.  What I didn’t know is that I would be saying good-bye.

She was unconscious and doctors discovered bleeding on her brain. As I walked out of her hospital room, Winnie Mandela was on her way in. She passed away that night.  The next morning I flew back to Johannesburg on the same plane as her coffin. According to Muslim rites, Feroza was buried that afternoon. Coincidentally, 9 August is also National Women’s Day in South Africa.

A few days later there was a large memorial tribute to her which drew friends from various aspects of her life. Many ANC luminaries paid tribute to Feroza, including then Vice President, Thabo Mbeki.  Controversial ANC executive committee member Jessie Duarte spoke saying that Feroza had taught her how to apply lipstick.  I also spoke about our unlikely friendship.

On the evening of 28 April 1995, the night before my wedding to Rory Stear, a dozen of my girlfriends sat around my dining room table.  We raised our glasses in a toast to Feroza, our absent friend.  I walked into the bedroom to get something and If I Had a Hammer came on the radio.  Trust me.  It’s not a song played on South African radio stations.  Ever.  I believed that it was Feroza’s way of letting me know she was with me.

My teacher, my friend

During our all too brief time together, I learned more about the struggles of South African women than I ever would have otherwise. I had the privilege of meeting countless self-effacing, incredible and courageous women of conviction because of her.  I had always considered myself a feminist, but I never understood the issues that poor women face.  She helped me to see them. Feroza also helped give context and a deeper meaning to my life and helped shape what would eventually become my life’s work. It wasn’t always an easy friendship, but it was one that I’ll forever treasure. I still miss her and feel a profound sadness when I think about her. I reckon that she would be happy to know that she will be forever remembered on National Women’s Day.