Shooting to Score, Not to Kill: International Woman’s Day Tribute 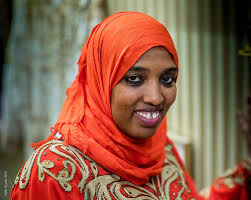 In Kenya’s remote Marsabit district near the Ethiopia border, girls face female genital mutilation (FGM), early or forced marriage, and lack access to education and health services. A sparsely populated and largely pastoral area where cattle trading is the main economic activity, the drought-prone region is plagued by conflict. And like in most places, violence affects women more than men.

The young Fatuma Abdulkadir Adan, whose parents came from still-warring tribes, was not encouraged to get an education.  The probability of a Muslim female from Masabit becoming a lawyer were similar to me becoming an Olympic figure skater.

Against the odds, Fatuma did become a lawyer.  Now she fights to promote peace, conflict resolution, education, economic self-reliance and development between the Borana, Rendile and Gabra peoples.  And her weapon of choice – sport.

Although she wasn’t’ allowed to play soccer herself until she was 25, while still in her early 20s and armed with a love of sports, Fatuma created and coached village boy and girls soccer teams. This led to the founding of the NGO Horn of Africa Development Initiative (HODI) in 2003.

I first met Fatuma in 2009 in Nairobi.  How she creatively and doggedly accomplished so much in a resource-poor region wracked by conflict and with few resources herself deeply impressed me. At that time she was creating radio programmes and physically delivering the content to a radio station in Nairobi, a 30-hour ride in an open lorry. It wasn’t unusual for her to the ride with sheep and goats.

Fatuma said, “We tell our young people, ‘Shoot to score; not to kill!’” Her initiative has now grown to 49 teams and is continually expanding its reach. Initially parents were hesitant to allow their girls to participate, but now some fathers even encourage their daughters. Through soccer, Fatuma has also found a way to address a complex set of problems facing women and girls, like talking about the need to “break the silence” – an indirect way to discuss female genital mutilation and child marriage.  HODI has facilitated youth participation in issues like women’s rights, domestic violence, rape and killings to settle early forced marriages, by training in negotiating skills.

She believes that a voice and a choice are the first steps in achieving gender equality. HODI is currently working with 6,000 children in 40 villages in the Marsabit area. Recently HODI has also begun working in southern Ethiopia.

Fatuma has won several international awards for her successful peacemaking efforts. Earlier this year she was one of only 20 women globally invited to participate in a colloquium for women community leaders aimed at strengthening women peacemakers around the world at Harvard’s Kennedy School.

On this International Women’s Day, I am proud to honour my friend Fatuma Abdulkadir Adan.