The boy who adopted me

It’s Mother’s Day 2021. I received this WhatsApp this morning.

In the summer of 2006, Tech Museum of Innovation Award Laureates were invited to the opening of the Nasdaq Stock Exchange in New York City. By chance I happened to be in town. Afterwards the group gathered outside in Times Square to pose for photos.
I couldn’t believe it. Unbeknownst to me, a picture that I’d taken in 2004 of then 14-year-old Jonathan, a Rwandan orphan, with his Lifeline radio balancing on his hoe, flashed across their digital billboard. The Tech Museum had first used this picture on the cover of their 2005 Tech Awards brochure.

How would I explain this to Jonathan – that he’d just appeared larger than life in one of the most visited, iconic places in America? He lived in a tiny mud and thatch house outside Nyamata town – best known for a horrific church massacre during the 1994 genocide. Nyamata had a population of 64,000 before the genocide and 2,000 afterwards. 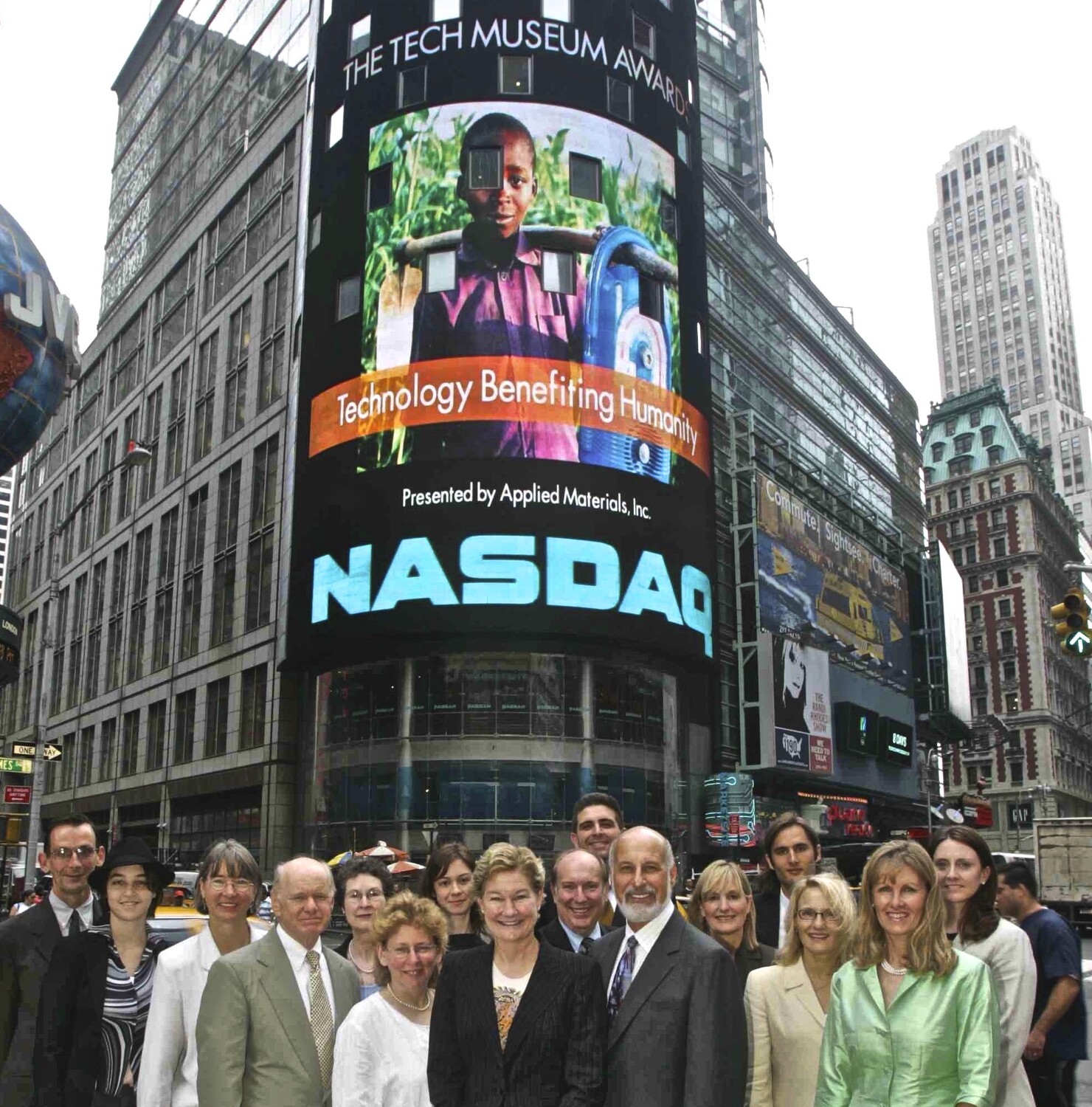 I met Jonathan during our first Lifeline radio distribution in Rwanda in 2003. He eagerly sat in the front row of a group of 50 child heads of households selected by our local partner to receive our new, big, blue solar and wind-up Lifeline radios. (The development of this radio was funded by the Tech Museum of Innovation and Vodafone Group Foundation, amongst others.) It was part of an information initiative called Project Muraho (‘hello’ in the Kinyarwanda language) for extremely poor child-only families. He looked so young and caught my attention right away. I couldn’t believe that he satisfied our 12-year-old age requirement. Annet, our partner assured me that Jonathan was 13. I suggested that we drive him home so I could verify this for myself. 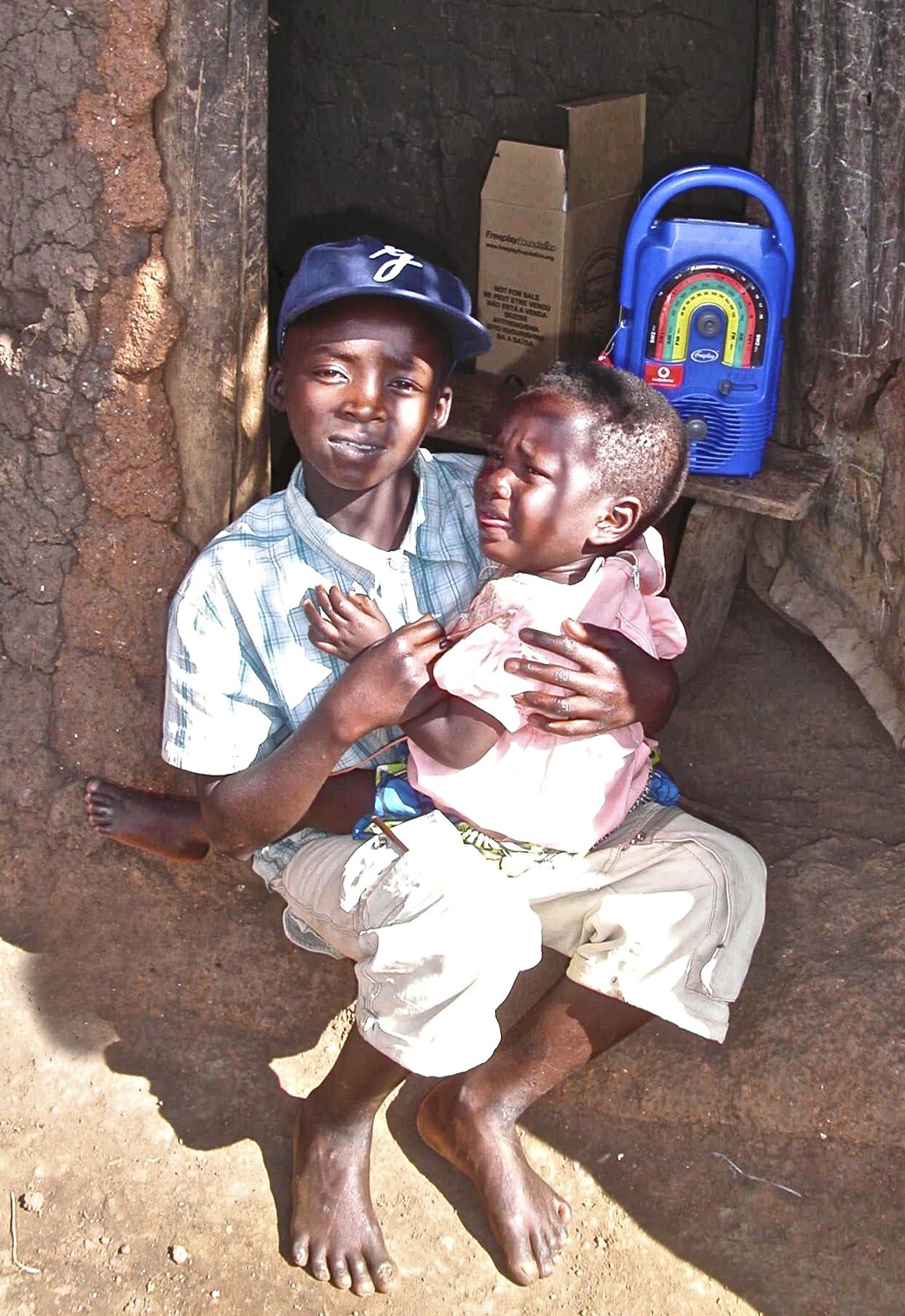 After bumping around for 20 minutes on a rutted dirt track, we pulled up to his one-roomed round house with two black goats tied to a post in front. Four small children appeared, including a baby in a pink dress. Like so many children in Rwanda at that time, this sweet adolescent boy was the head-of-his-household and responsible for raising his siblings on his own. At this time, UNICEF estimated that there were 101,000 households headed by children under the age of 18 in Rwanda.

During the 1994 genocide his family walked for three weeks to a refugee camp near Goma in the Congo where they lived for a couple of years before walking back to Nyamata and starting over. Jonathan’s mother, Juliette, passed away shortly after giving birth to baby Arissa. His father died soon after from malaria in 2002.

Many times in the past 20 years I’ve wrestled as to what extent I can or should become involved with a child that touches me. It happens often. I’m sure many who work in the humanitarian sector grapple with this. It’s a decision that has to be carefully considered – not just for child protection reasons – but also as to not raise the hopes of children who have so little and for whom your attention may mean so much.

My belief is that if you start a relationship you have to be realistic about the level of involvement you can maintain and you must work through local experts. You can’t build up hope or expectations of a child or family and then not be able to fulfil them.

Always accompanied by our local partner and often with a government official, I visited Jonathan and his family many times over the years. From the second time I saw him, he called me ‘mother’, which along with ‘hello’ and ‘thank you’ summed up his English vocabulary. I learned that Arissa, the baby in the pink dress, was actually a boy. The next eldest, Chantal, was a girl and until the age of three, he wore her clothes. In 2007 their house collapsed and a friend in Ireland, Frank Reidy, raised funds and built the family a four-roomed cement house.

In our personal capacity, my husband and I have helped Jonathan and his family with a range of necessities. I’ve had to be mindful that providing too much could create jealousy with other child families who didn’t have a ‘muzungu’ (white person) helping them.

While still in high school, at the age of 20, Jonathan began emailing me. Not only was his still English limited (as was my Kinyarwanda), he hadn’t discovered how to use the space bar. His barely decipherable emails were one gigantic word and always ended in “congratulations”. I still have these charming mails.

Setting out on his own

At the age of 22, despite the odds, Jonathan graduated from high school. Although we helped him and his family in small ways over the years, the only thing he has ever asked from me was to help him with his education. As a start, we sent him to the British Council in Kigali to improve his English. He finished first in his class.

All dressed up in his church clothes – a shirt and tie, black trousers, light brown shoes and white socks – we met with the admissions officer of an accredited tourism school in Kigali. I enrolled him in a two-year diploma course in Food and Beverage Management. After the meeting, I took him to a casual restaurant for lunch, his second ever restaurant visit. As we walked out, he opened up his hand and said, “you left this on the table.” It was the tip. 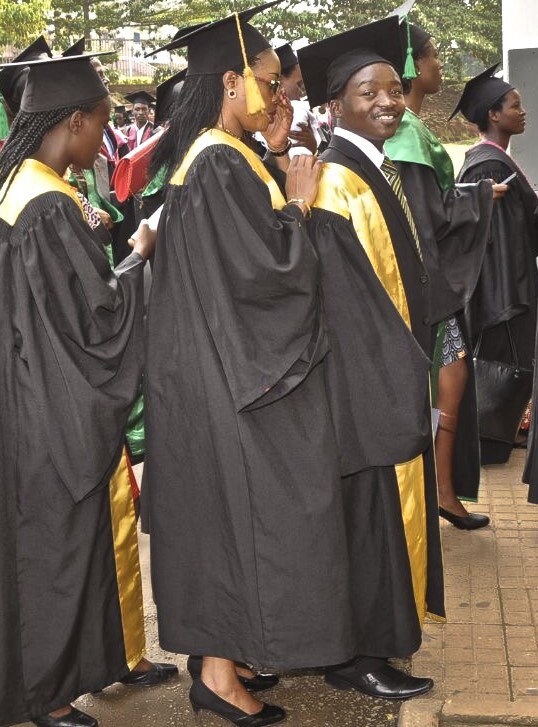 And two years later, Jonathan graduated in the top of his class in Food and Beverage Management, where he wore a cape and gown at the graduation ceremony. Now he works as a waiter at a top international hotel in Kigali and has a career track with benefits. He rents a new apartment and has dreams of building a house in Kigali, getting married and having a family of his own.

I feel intensely proud of this ever-enthusiastic and conscientious young man whose childhood passed him by. He still remembers the horrors of the genocide, lost his parents within a year of one another and was left to raise four younger siblings with little outside support.

Over the years he’s grown food to sell, looked after other people’s goats and dug in neighbour’s gardens all to make money to feed his family. He told me when he was still in high school “it is important for me to get an education, to learn English perfectly and to find a good job. Then I can make sure that my siblings will get an education, too.” Ensuring they have a better future has always been his main aim. His brothers and sisters have finished or are attending school. The next eldest brother is a teacher.

Who knows, maybe some day Jonathan will visit Times Square himself, look up and see that electronic billboard that he graced all those years ago.

Although I don’t have birth children of my own, I am deeply grateful that he ‘adopted’ me all those years ago. He’s been a son that any mother would be proud of. If only Juliette could see what a fine young man he has become.