Crossroads is a sprawling township within view of Cape Town International Airport. The contrast between the two couldn’t be starker. The airport: clean, slick and efficient, rated as one of the top airports in Africa in 2014. Less than a mile away is the densely-populated township of Crossroads.  During the 1970s and 80s, Crossroads was an area that saw many battles between the apartheid government of the time and opposition movements, with the former trying to close down the township. It was only in 1987 that the citizens of Crossroads acquired the status of a local authority.

Today, it’s a bustling, busy area of Cape Town, with a population touching 40,000. And this is where we went – to deliver one of our Lifeplayers to a primary school in the township. 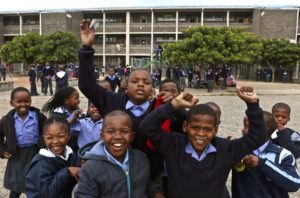 Imbasa Primary School lies as a beacon in the midst of Crossroads. It’s a school that’s seen phenomenal growth in three years: from around 400 pupils in 2012 to more than 1,000 today. Unlike most South African primary schools, Imbasa incorporates a middle school, and children can remain at the school from kindergarten through to Grade 9.

Imbasa’s Principal, Vuyelwa Ndunduzela, is energetic, innovative and justifiably proud of her school – and it’s due to her and her staff that the school’s seen such enormous growth in the last three years. They’re passionate about their school, and about educating the children in their care.

Their pupils are from impoverished families. More than 80% of the children are from single parent families, are orphaned or being cared for by a grandparent. Many caregivers are unemployed, and those who do work have jobs mainly as domestics or day labourers. Around 20% of the families associated with the school are affected by HIV. Most parents are young. 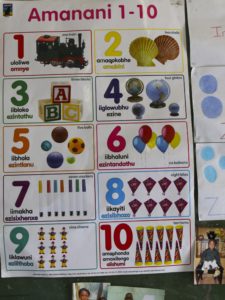 But while Imbasa Primary serves a poor community, its resources are light years away from schools we’ve seen in other parts of Africa, which are sometimes simply a rough-hewn blackboard propped under a tree. Imbasa has brick and mortar classrooms, electricity, desks, posters and books. It has teachers in each classroom, teaching subjects ranging from mathematics and English, to Xhosa, science and technology.

One of the anomalies in South African education is that children are taught in their home language – which in the case of Imbasa Primary is Xhosa – only until Grade 4. After this, all subjects are taught in English. It’s a difficult transition for children to make: as the concepts they’re being taught become more difficult moving into the senior phase of primary school, they’re also having to contend with learning in a language that’s not their own.

It’s always a privilege for us to meet the teachers and children from a school in our own city, just a few kilometres from our offices, as our work normally takes us to countries in the rest of Africa.  And while Imbasa is a far better resourced school than most we see, the teachers here were no less excited about the Lifeplayer. We spoke to language, science and technology teachers – and each of them came up with inventive and interesting ways they’d use the Lifeplayer.

For younger children, the songs we’d recorded from a local TV programme called Takalani Sesame were a big hit. For older children, language teachers saw huge potential in helping their pupils develop listening skills – particularly important as they make the transition to learning in English. Science teachers saw a way of using the Lifeplayer to explain scientific concepts, and to assist in step-by-step experiments. There was no shortage of ideas!

We handed over a Lifeplayer to Imbasa so that the teachers can experiment further, and see how they’d like to use it in their classrooms. We’re hoping that this will be the first of many Lifeplayers being used not only by Imbasa Primary School, but by many other Cape townships schools.