The Tale of Zambian Trees

“Its just so…painful,” Boniface said as he pulled the motorcycle over on the side of the road. It was an understatement to say the least. Boniface, my agro-forestry mentor and guide here in Zambia, had taken me out to Nakabwe, a small center on the outskirts of the Chikuni Parish. We had stopped to look over one of the many hillsides in Nakabwe. Nearly the entire slope had been cleared of its trees, all of which now covered the ground, grey and dying. An acre of trees had been cut and the space marked the land like a scar.

On the way, we had met a local woman who was washing clothes outside of her house. We stopped to talk to her and learned that just one man had done the entire clearing. 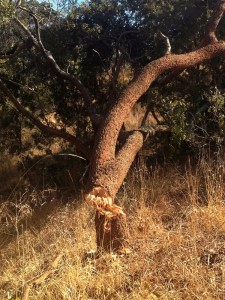 As we gazed out over the scene, Boniface talked of a time when the hills of Nakabwe were covered in trees. Dense thickets and growths characterized the forests here. He told me that the only roads had been small trails that wound through the hilly landscape from village to village. The forests once harbored many wild animals and the people spent their time collecting mushrooms and tubers to sell. I had been under the impression that this time was long gone, and was amazed to learn that it had only been five years since the forests had been there.

Boniface sighed and kicked a nearby stump. “This tree was 100 years old,” he said. The stump was the butchered remains of a Mu’umba tree, normally a beautiful hardwood tree with a spreading canopy. Stumps like these scattered the landscape in every direction.

The man who had cut the trees, the woman we had visited, and many other families in the area, are involved in charcoal production, which are drastically increasing the rates of deforestation. Charcoal offers the locals a lucrative source of income that is quicker and easier than farming and is a stark example of energy poverty in the developing world. People without electricity in urban areas need charcoal to cook their food and with increasing urbanization, demand has skyrocketed. As a result, many people in rural areas have made the switch to charcoal production. The evidence is two-fold, an increasingly sparse landscape and hundreds of scorched parcels of land where the soil has been poisoned during the production process.

“I cannot be angry with them,” Boniface said, “they just don’t know what else to do.” It is true. The concept of long-term environmental degradation is hard to grasp when you need money to feed your family. Yet for every tree that is cut down, the land loses more fertile soil, temperature swings get more volatile, and the winds grow faster, spreading fires and damaging buildings. It is painful not only because of the level of destruction, as illustrated by the ability of one man to clear an entire hillside, but also because of the difficulties that these people will have to face in the future if deforestation continues at this rate. 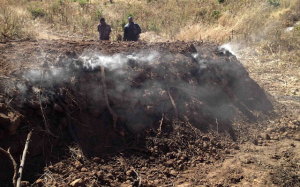 “There is much work to be done,” Boniface said with a smile on his face. Education is perhaps the best way to help stop this major problem. Even though the demand for charcoal is not easily remedied, providing people with the knowledge and materials to replant the trees that have been lost is a vital part of the solution.

Similarly, educating people on other ways to generate income, such as having diverse agro-forestry gardens with many products, can help to alleviate some of the pressure people feel to switch to charcoal. Feeling inspired by Boniface’s positive attitude in the face of such a massive problem, I hopped back on the motorcycle and we set off to try and help shed some light on the dangers of deforestation for the people of Nakabwe.