A Teacher who Provides more than Just an Education 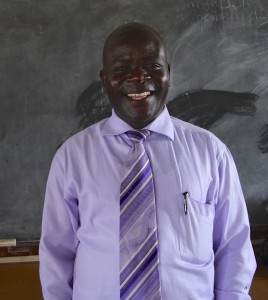 The second teacher we’re profiling in our #teachertuesday series is our old friend, Mwenya Mvula.

In 2001, Mr Mvula served as a volunteer ‘mentor’ in Zambia’s Learning at Taonga Market primary radio school programme. Mr Mvula was one of the first in Zambia to be trained to use interactive radio instruction (IRI) methodology, which actively guides teachers and learners through lessons on the radio. He estimates that nearly 90% of his students over the years have progressed on to secondary school – an awesome accomplishment in a country where girl is just as likely to get married early as she is to complete a high school education.  Perhaps most significantly, one-third of the children he’s taught are orphans.

Bear in mind that pupils in radio school, who might learn in a makeshift structure, lack uniforms, and could go to school hungry, take the same exams as children of wealthy parents with computers at home.  Nevertheless, these kids often score higher than children in government schools in math, English and science.

I first met Mr Mvula in 2007 at a community learning centre in a Lusaka compound that used our big blue radios. At that time one of his classes convened in a one-room brick house lent to him by a security guard; another assembled on the grass near a corn field. I was taken with his natural enthusiasm for Taonga Market and how he engaged the children.

Former students of Mr Mvula have told me how he always encouraged them to reach for their dreams. When I asked him about his own dream, he told me that he wanted to become a qualified teacher.

Now that dream has come true. Mr Mvula, the qualified teacher, teaches Grade 6 science classes at the large basic government primary school, New Mandevu. His classes have more than 100 pupils whereas the radio school classes were much smaller.  But it doesn’t matter.  He just loves to teach.

In February Mr Mvula helped us to introduce the Lifeplayer loaded with Taonga Market lessons to 85 students in a Grade 1 class. He showed the same enthusiasm as when I first met him in his outdoor classroom back in 2007.