Having recently emerged from nearly four decades of conflict, in which two million people were killed and four million displaced, everything was destroyed and everything needs rebuilding or building in the first place.  South Sudan, the world’s newest country, also has the world’s lowest education indicators.

Countries like South Sudan, struggling to deliver quality education, are exactly why we created the solar-powered Lifeplayer MP3 in the first place. Our Lifeplayers have arrived in the country and so have I, to train in their use and care. 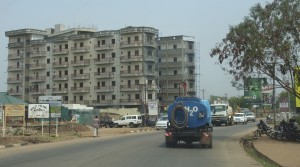 Five years is a long time in Africa nowadays.  When I last visited South Sudan there was just 50 miles of tarred road in a country the size of Texas.  Now main roads are paved in the capital city, Juba, although there still aren’t traffic lights.  The one story skyline of bamboo and thatched huts are increasingly being replaced with soulless low-rise Chinese built hotels and offices. In 2008 seeing a television set was unusual, now every restaurant I’ve been to has a flat screen. I watched crowds of Kenyans following the elections, and Juba is full of Kenyans.

Not only will you find large numbers of Kenyans, but an influx of Ugandans, Ethiopians, South Africans, Chinese and others all seeking economic opportunities. They’re bringing much needed skills and expertise.  Pretty much what you read about Juba is that it’s a boomtown – the new El Dorado of Africa.

Booming it may be, however, nearly three quarters of the population can neither read nor write.  According to the Overseas Development Institute (ODI) less than two percent have completed a primary education and even less completed secondary school. Proportionately South Sudan has fewer girls in school than any other country and girls make up only one in four schoolchildren.  Although education is a priority, the government is struggling to build an education system in a country where most of its eight million population live in rural areas and where many still experience displacement through ongoing conflict with their northern neighbour, Sudan.   Furthermore, the education needs of millions of adults who missed out on school also need to be addressed. 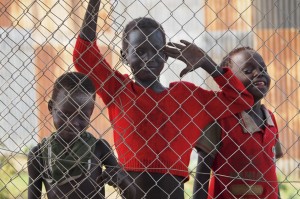 Even around Juba the number of children not in school is palpable. Primary education isn’t free. Costs vary between urban and rural schools, but by the time fees are paid, and uniforms, books and shoes are bought, a basic education lies beyond the reach of many families.

The teacher shortage is severe and less than 1 in 15 teachers is female.  Not even half of the teaching force have completed a primary education themselves, resulting in poor quality instruction. A former teacher told me that attrition is high as international NGOs recruit teachers at a much higher salary. Wages for teachers are low – between $50 – $100 on average per month.

After the Comprehensive Peace Agreement was signed in 2005, primary enrolment soared. Class sizes are the largest in Africa, with more than 100 pupils per class.  Children often sit on top of each other.  In addition, there are acute shortages of classrooms, books and school supplies.  Everything is needed.

One of the programmes to help address the professional development of teachers is the South Sudan Teacher Education Program (SSTEP).  It’s a three-year nationwide initiative funded by USAID and implemented by Education Development Center (EDC) to strengthen primary school education.  It will assist the Ministry of General Education and Instruction in the management of the overall education system, develop and shape policies, refine and mobilise a training curriculum, improve teacher performance and advance gender equity.

To help address these massive educational needs, a significant number of our Lifeplayer MP3s pre-loaded with an audio primary school curriculum called Learning Village are being integrated into the SSTEP initiative. Learning Village, which covers Grades 1 to 4, was broadcast on 19 local radio stations; however, this has ended due to cost.  By utilising our Lifeplayers, not only will the programmes be able to continue, but also if a child misses a lesson, it can be made up. The MP3 function enables programmes to be played on demand. This is especially important in conflict areas or in places prone to flooding during the rainy season. It’s envisaged that tens of thousands of learners will benefit from this intiative.

When I was last in Juba in 2008 it was to help create a pictorial and visual training programme to support the 250,000 self-powering radios that we had sent into then southern Sudan to support a broad-based civic education radio show called Let’s Talk. The programme helped people understand their role and responsibilities before they voted in the January 2011 referendum.

This time I’m here to train trainers on the use and care of the Lifeplayer MP3, who will in turn train rural teachers. As more than 15,000 of our radios have already been used to broadcast Learning Village, teachers have been trained in Interactive Radio Instruction (IRI) methodology, which Learning Village embraces.  That said, the Lifeplayer MP3 is more complicated and technologically advanced, offering a much wider spectrum of features.  MP3 also uses more energy than radio, and needs to operate from its solar panel which is more efficient than human or wind-up energy.   The Lifeplayer uses sets of rechargeables in the solar panel and in the device itself to double energy capacity.

We are convinced that the Lifeplayer MP3 will help to strengthen the SSTEP initiative and help to educate and inspire South Sudanese learners and teachers. After all, it was exactly for programmes like this that seek to address the enormous education deficiencies that exist in Africa, that we initially developed the Lifeline radio and later its technological successors the Prime radio and the Lifeplayer MP3. We are deeply gratified to be contributing to this excellent initiative and to the work of the EDC team which has taken up fundamental educational challenges in South Sudan.